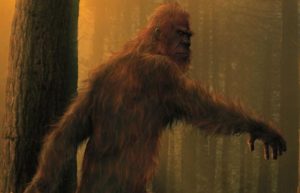 British researcher of anomalous phenomena Andy McGrath usually studies the phenomenon of mysterious big cats or werewolves, but he did not believe that there were yeti in his country. Until he met this creature with his own eyes.

An unnamed British runner saw a fat, brown fur-covered creature approach him and then fled back into the forest. It happened just 25 miles from London, UK, in the wooded area of ​​Box Hill, Surrey. According to eyewitness accounts, the creature resembled a hybrid of an ape with a man and was extremely muscular.

And after a while, an eyewitness shared this story with a local researcher of anomalous phenomena, Andy McGrath.

According to McGrath, he used to think the idea of the existence of a Yeti in the UK was completely absurd, but he changed his mind when he saw with his own eyes a creature that scared a jogger.

Andy McGrath said that after talking with an eyewitness, he arrived at the very place where the runner saw the shaggy creature and carefully examined everything there. At first, he did not notice anything strange, but at some point he heard something hitting the tree trunk hard. The noise was loud and at the same time seemed from several directions from a distance.

Then the noise stopped, but after 25 minutes it was heard again, and now it was much closer. Then McGrath heard the sound of heavy footsteps, as if something was walking in the thicket, descending a gentle hill.

When the creature was very close, he heard its heavy breathing and felt that it was being watched. At the same time, he himself had not yet seen anything, although it was not yet dark.

“Then I turned back and immediately turned over my right shoulder. And there, about 10 meters away from me, on the right side and a little higher on the steps, stood something that I sincerely consider to be something like a humanoid ape,” says McGrath.

The creature he saw was covered from head to toe with brownish-gray fur, and its face was similar to that of a human, but with a flat nose and a very large jaw. The top of the head was domed upward.

“The creature stood on two legs, but seemed to hang forward, and its arms were very long, but in proportion to the body. The animal was very densely built: I examined the strong muscles. I’m not sure how tall it was, at least 2 meters, but maybe more.”

“He stood and looked at me before turning and leaving, but even when he was gone, he looked in my direction. Then I smelled a strong stale smell that usually comes from farm animals. This smell persisted for a long time. ”

Now Andy McGrath is firmly convinced of the existence of the British Yeti and, according to him, it completely changes the rules of perception of the world and fauna.