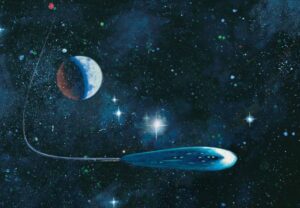 While most people consider the term ‘UFO’ to be directly linked to that of alien spacecraft, there are some who consider the exact opposite, meaning that instead of the futuristic approach of artificial objects they view UFOs as organic entities that inhabit the cosmic void surrounding us, reports ufoholic.com.

After all, we already know about the ‘Water Bears’ or Tardigrades, the micro-animals capable of surviving in the harshest conditions and also in outer space, so why wouldn’t there be other similar creatures?

Such alien bioforms may exist, and are actually well documented by Dr. Franklin Ruehl, an American ufologist and cryptozoologist with a Ph. D. in theoretical nuclear physics from UCLA.

According to his analysis, there are biologic entities dubbed ‘Zeroids’ that are living in outer space and can virtually survive in zero temperature and zero atmospheric pressure conditions.

These ‘Zeroids,’ according to Dr. Ruehl, could have developed from organic mixtures found in space to survive its apparently unhospitable conditions, and they could be one of the first lifeforms to arrive or develop in space. If scientists prove this mysterious lifeforms exist, it could bring us one step closer to understanding many of the UFO sightings across the globe, but also from outer space.

Dr. Ruehl wrote a detailed report for The Huffington Post in which he offered more details about Zeroids, and how they managed to surpass the test of time and the harsh conditions in outer space. He wrote in the article:

“Considering that our island universe is approximately 13.7 billion years old, it is conceivable that zeroids represent the earliest forms in the cosmic backdrop, perhaps even existing for nearly that entire time. With such an elonged span of time at their disposal, zeroids could easily have trod many different evolutionary paths: They may range in dimensionality from the microscopic to the macroscopic.”

Further on, he explained how these bizarre entities manage to feed and reproduce based on different sightings recorded here on Earth. He added that:

“Morphologies may vary from the utterly simple to the extraordinary complex. They may live singly or in vast colonies. It should, of course, be stressed that humanoid forms are not to be expected.

“But, intelligence might be a developed feature…For sustenance, zeroids’ primary bill of fare might well be intergalactic dust and gas. Also not to be overlooked is the distinct possibility that larger zeroidal entities might possibly feast upon smaller ones… Zaroids may have migrated to all sectors of space – both within and without galaxies.”

According to Dr. Ruehl, zeroids have expanded a protective shield that’s either physical or electromagnetic in nature, defense mechanism which allows them to survive the leap into our material realm. Such sightings are described as ‘living UFOs.’ His claims are likely to be true, as there are many detailed reports of such entities, including authentic footage. However, Ruehl wanted to highlight two known cases involving zeroids.

In 1976, there was a spectacle of light above the city of Cluj-Napoca, Romania, where these ‘creatures’ materialized into a vivid sphere of light that manifested as it were alive. According to Ruehl, photographs taken of the entity passed all tests of legitimacy.

The second appearance happened in 1978 in British Colombia, when researcher Dorothy Wilkinson surprised a great flock of light beings that resembled space worms, and took as many pictures as she could. Today however, there are many people witnessing these mysterious entities, and there are many videos to prove it.

Are these beings the same with the orb-UFOs? Can they really morph into living spheres of light? These are troubling questions to answer for the moment, but if it proves to be so, it would indeed explain an entire lot of UFO sightings.

However, the ‘space worms’ may not be the same with the ‘orb UFOs,’ meaning that our planet is hosting an entire hive of distinct alien lifeforms. Whatever the case, you can filter this information on your own based on the below videos, and please share your thoughts with us.