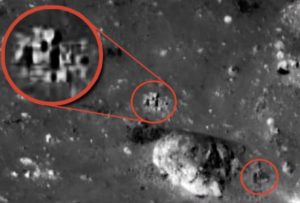 Taiwanese ufologist and virtual archaeologist Scott Waring has shared his next mysterious find with Internet users. He believes that he was able to find a real alien base in the images of the lunar surface, and cites a NASA image as evidence.

According to the ufologist, on the surface of the moon in the crater of Aristarchus, he managed to find strange structures.

The crater, in which the artifacts are visible, has a diameter of 40 kilometers. The dimensions of the buildings located in it are from 300 to 500 meters.

The ufologist believes that his discovery finally explains why the United States cannot return to the moon:

“It’s just that we are not welcome there, and we were not welcomed from the very moment we were on the Earth’s satellite.”

Scott Waring is convinced that NASA is hiding these structures by adding too much light to the photographs, which makes the most interesting objects look blurry. If you add a little contrast, the researcher explains, the focus will return to its original state, and everything will be perfectly visible.