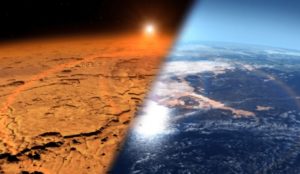 A new study published recently in Science Advances suggests that water can occur naturally on planets and does not require an external source like water-rich asteroids. The study turns the current theory of the appearance of water upside down, reports Science Daily.

“There are two hypotheses about the emergence of water. One is that it arrives on planets by accident, when asteroids containing water collide with the planet in question,” says Professor Martin Bizzarro from the Centre for Star and Planet Formation at the Faculty of Health and Medical Sciences, University of Copenhagen.

Together with Assistant Professor Zhengbin Deng he has headed a new study that turns the theory about the emergence of water upside down.

Currently, there are two hypotheses about the appearance of water on planets. The first says that it appears by chance when asteroids containing water collide with planets; and the other – that it arises in the process of the formation of the planet.

If Martin Bizzarro and Zhengbin Deng’s theory turns out to be correct, life in planetary systems may have a better chance of developing than previously thought.

Scientists’ research shows that Mars had water for the first 90 million years of the planet’s existence.

It turns out that this was long before water-rich asteroids bombarded the planets of the inner solar system such as Earth and Mars. “And it’s very sensational,” Bizzarro explains.

“This suggests that water arose simultaneously with the formation of Mars. And that tells us that water can be found naturally on planets and does not require an external source like water-rich asteroids,” he says.

The study is based on an analysis of a 4.45 billion year old black meteorite found in North West Africa and nicknamed the Black Beauty.

The object originates from the original crust of Mars and contains invaluable knowledge about the young solar system.

If the theory is indeed correct, then life on other planets is most likely a very frequent occurrence.