Various types of biped reptoids have been reported. There are Amerindian legends about Lizard People who live underground.

According to Hopi legend, Mount Shasta, California is home to these creatures. There’s a debate as to whether reptilians belong in the realm of cryptozoology, UFO aliens or science fiction.

These entities are from 5 1/2 to 9 feet tall, have lean bodies and brawny arms and legs. Claws are short and blunted. Their scaled skin is usually greenish-brown or coffee colored with dark green edges.

The scales on their backs, thighs and upper arms are large; their hands, abdomen and face have smaller ones. Mouths are lipless and wide and the majority of them have teeth and fangs. Eyes are large and black or white with vertically slit pupils. Heads are conical with two bony ridges that rise from their brows and run across their skulls to the back of their heads.

These least sighted entities are 7 to 12 feet tall. Draco, Latin for dragon, is similar in appearance to the Reptoid, but there are some differences. They have wings, capable of flight, made of long, thin bony spines protruding from their backs, joined by flaps of leathery, blackish-brown skin.

The scales are brownish green. Glowing eyes are red and they have horns. Some witnesses have reported seeing these creatures wearing capes. The Draco Prime has white scales.

Biped Greys are between 3 to 3 1/2 feet tall, have a small thin build and large earless heads. They have tough reptilian skins without scales. Their large tear-shaped eyes are slanted with vertical slits.

Arms are long with hands having up to four fingers. Feet are small with four diminutive clawed toes. There’s no one description that fits all crossbreeds. 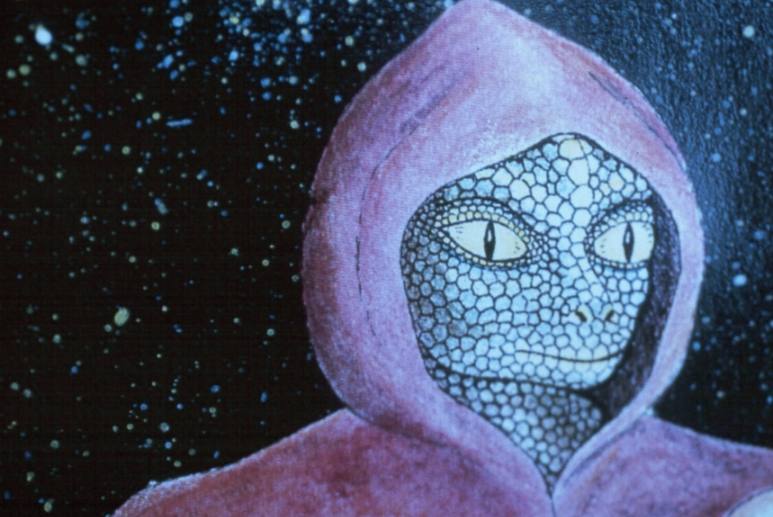 Extraterrestrial reptilians are alleged to live in remote areas with empty underground spaces. Carthage, Missouri, March 7, 2004: Pat Garrett and a friend were riding two ATVs in a site called The Underground, a private subterranean storage facility that, allegedly, consists of caves miles long, used by the US Navy to store dehydrated food and a designated nuclear bomb fall out shelter.

As they neared the facility, they saw two reptilian aliens. One was at least 7 feet tall, reddish and powerfully built; the other, about 6 feet tall and albino. Garret called the Sheriff’s Department and was told that Underground Security would look into the sighting, they weren’t to report the incident and that the Navy would charge them with trespassing if they returned. When he called the sheriff’s department again, he was told they never received a call from him.

Near Dobbins Air Force Base in Georgia, December 16 2003: Mike B. was camped by a creek. He heard bird-like sounds, then saw a biped creature resembling a lizard, about 7 feet tall, that was walking toward him. He found footprints made by more than one of the entities. At the time of the sighting he saw blue-ish lights over the woods to the north, possibly from a UFO.

There are many unknown mysterious animals, UMAs, who are bipeds. Big Foot is, probably, the most well-known. Florida’s skunk apes and napes, hairy bipeds, are relatives. The former resembles gorillas; the latter, chimpanzees. West Virginia has Mothman, a flying creature which some people describe as a man or large grey beast with glowing eyes and gigantic wings.

African Kongamato is described as a flying prehistoric-looking reptilian cryptid. There are water monsters and Thunderbirds, huge feathered flying UMAs. Reptilians are described as having scales or leathery skins and sharp points on the top of its head and, in some cases, frog like mouths.

Loveland, Ohio, May, 15, 1955: a man reported seeing three reptilians around 3:30 AM. He watched them for several minutes and smelled what he described as fresh alfalfa and almonds. He reported the sighting to the Loveland Police Department.

Chief John Fritz investigated and found nothing, but believed the witness was sincere. Two Loveland police officers saw a similar reptilian hop a fence and head toward the Little Miami River.

Approximately two weeks later, the same officers saw the creature lying in the road, rise and jump over a guard rail. One of them shot at the UMA, but missed. A local farmer reported seeing the same cryptid. Evansville, Indiana, August 1955: Mrs. Darwin Johnson was swimming in the Ohio River by when she was pulled underwater by something with claws.

She was able to surface, but was pulled under again. She lunged at a friend’s inner tube which ended the attack. While she didn’t see what grabbed her, there was a green mark on her knee and scratches for which she received medical treatment. Riverside, California, November 1958: a man was attacked by a reptilian while driving his car.

Thetis Lake, British Columbia, August 19, 1972: two men reported that they were chased from the beach by a silvery monster that rose from the water. There was a second sighting on August 23rd. New Jersey, 1973: people witnessed a large creature that look like a human/alligator crossbreed.

These reptoids have been witnessed by many people. Some UFOlogists maintain that they are aliens who have made subterranean cities on planet earth. Cryptozoologists have compared reptoid sightings with those of other UMAs.

Skeptics declare that reptoids are purely science fiction that dwells in people’s imaginations and accounts are manifestations of these. Is it possible that there are both alien and cryptid reptilian bipeds that have different breeds?

Is it possible that only a minority of chosen people, primarily government officials and the military, are aware of alien reptoids and keep this hidden from the public? The deeper I delve into reptilian bipeds, the more questions I have….