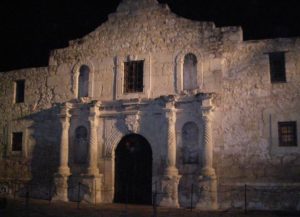 Specters of the men who were killed in the last Battle of the Alamo on the morning of March 6, 1836 when Santa Anna’s army attacked haunt the fortress…

The citadel was originally named Mission San Antonio de Valero, built as a home for missionaries and their AmerIndian converts in 1724.

In the early 1800s, part of the former mission complex was used as the headquarters of a Spanish cavalry unit. The soldiers posted there dubbed it Alamo, meaning cottonwood, to honor their home, Alamo de Parras,in the Mexican Coahuila province. By the time of the last battle, the fortress was held by Texans.

The Alamo is the site where one hundred and eighty-two Americans were slain and sixteen hundred Mexican soldiers were wounded or killed and buried.

On that fateful day March day, Santa Anna’s troops attacked the Alamo, killing all of the Americans soldiers. Several non-combatant people were left alive so they could tell fellow Texans what would happen if they continued to rebel against Mexicans.

After the fray, the Alamo defenders’ remains were looted, dismembered, burned, thrown into the river or buried in mass graves.

Ghosts of the Alamo

The first experience with ghosts happened a few days after the last battle. A Mexican Army contingent went to destroy the Alamo due to disease caused by the carnage.

The men fled when they saw six spectral Diablos, devils, guarding the fort who screamed at them while waving flaming sabers. When General Andrade investigated the incident, he saw the Diablos.

Guests at nearby hotels see bizarre specters emanating from the Alamo’s walls. They report hearing screams, explosions and faint trumpet notes of El Deguello, a bugle call used as a march song by Mexican Army buglers during the 1836 siege and last battle of the Alamo.

A cowboy’s apparition, believed to be a courier, is seen wandering the Alamo’s gardens. One ghost puts his head and shoulders outside a window, then leans back and vanishes.

There’s the young spectral blonde boy seen in an upstairs window and walking on the grounds. A woman’s misty phantom appears next to a well on the site. An AmerIndian’s ghost is seen in the basement that abruptly vanishes or walks through a wall.

A mournful Mexican officer’s phantom wanders on the grounds. Many believe he’s the shade of General Manuel Fernandez de Castrillon, one of Santa Anna’s regimental commanders who was against the Alamo’s final attack.

Davy Crockett’s ghost, dressed in buckskins and a coonskin cap, stands at attention. Ghosts of a man with a toddler on the roof are seen during sunrise. Two ghostly boys follow tour groups and vanish when the group reaches the sacristy room.

They’re thought to be the phantoms of Artilleryman Anthony Wolfe’s sons who were killed during the battle.

In March of each year, a few days after the anniversary of Alamo’s demise, many people are awakened by the sound of a horse galloping on the pavement. They believe the unseen rider is James Allen’s ghost, the last courier to leave the fortress on the evening before its last battle.

Fortress walls were dismantled and buildings were built on the land that was the Alamo’s. Specters wander on this land. Almost all of the stores on Alamo Plaza are haunted.

Many bodies of Americans who died in battle were burned near where the River Center Marriott stands today and are said to haunt the place. A nearby bookstore has a corner that’s very cold and its books often fly off of shelves by themselves.

The children’s playground is said to be haunted by the Mexican soldiers who were buried in the site.

Paranormal Investigations Banned at the Alamo

The fortress is a registered historical site maintained by the Daughters of the Republic of Texas.

Taking photographs of the interiors of the Alamo church and the long barracks, the only two original structures still standing, is forbidden. No electronic apparatus, including EMF meters, are allowed to be used inside them.