Off the coast of South Carolina is the so-called Monkey Island, on which only rhesus monkeys live. Scientists from the National Institute of Allergy and Infectious Diseases previously conducted experiments on these former laboratory monkeys.

This territory is officially closed to the public and this is a federal ban, for violation of which you can get a big fine. Therefore, none of the locals swim there and no one knows what is happening on this island now.

But recently, this island again surfaced in the theories of conspiracy theorists, because on a beach near it, a local resident accidentally discovered a skeleton of a very unusual creature.

A woman walking her dog along a beach in South Carolina came upon a strange creature’s ghastly remains that had been washed ashore. 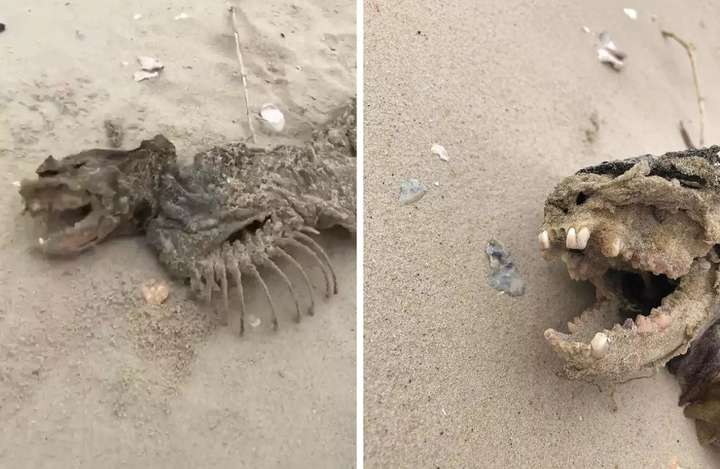 Erika Constantine reportedly made the gruesome discovery, as she and her pet pooch River visited a site near Charleston known as the Sunrise Park.

Their usually boring beach trip took an unexpected turn when the dog spotted something unusual in the sand and ran off to investigate.

“It was the size of a small dog but the structure of the whole thing suggests it’s definitely not a dog,” Erika observed, “I have lived here for about five years and I have never come across something like this.”

Identifying the oddity, which had largely been reduced to a skull and what appeared to be a rib cage, proved to be something of a challenge.

“Technically, this island is called Morgan Island, but everyone calls it Monkey Island. There are no people on it and there are only monkeys that were previously experimented in a medical laboratory. Probably one of these animals accidentally fell into the water and was brought over here.” – says Erica.

If the monkeys on this island look so creepy, what experiments were done there?