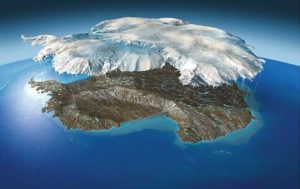 Researchers have used satellite information to map out the landscapes hidden under the ice of the most southern continent. The study applied data from the Gravity Field and Steady-State Ocean Circulation Explorer (GOCE) artificial satellite which exactly measured the pull of Earth’s gravity to map out hidden landmasses.

Although the satellite mission itself finished in 2013, the data it obtained is still proving invaluable.

Antarctica was once part of a much larger supercontinent known as Gondwana which began to break apart sometime around 130 million years ago.

By combining the satellite data with seismological data, researchers have managed to map out hidden geological features in the Earth’s lithosphere – the outer shell that consist of the crust and mantle.

This has, in turn, assisted to identify the terrain under the ice and how it evolved over time.

“In East Antarctica we see an exciting mosaic of geological features that reveal fundamental similarities and differences between the crust beneath Antarctica and other continents it was joined to,” said staff member Fausto Ferraccioli from the British Antarctic Survey.

A 3D recreation revealing how Antarctica’s plate tectonics have changed over the last 200 million years can be viewed below.