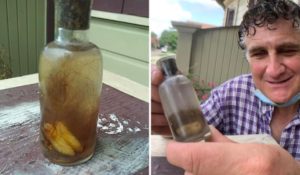 The 52-year-old, who works in New Orleans as a bartender, spends his spare time visiting the places where once abandoned homes stood, hoping to discover something unique.

Last month, Mears reported in a post on Facebook that he had dug a ‘witch jar’ from the mud at Algiers Point, on West Bank of the Mississippi River.

The strange object included a tooth, human hair strands, a pincher beetle and even some urine.

“Located in an area where a home existed in the mid-1800’s (and the bottle dating from that time period, as well), such an object may have been used as a protection spell for the property”, he told.

“It also may have been used in voodoo to cast a different spell. Anyway, it is a rare, creepy-cool find!”

He was thrilled about his discovery-however because of the item’s possibly grim past, users on social media encouraged him to bring it back where it was taken from.

His post quickly went viral, with over 1,300 people sharing and responding.

One individual wrote: “Needs to be returned to exact area. I wouldn’t have taken it. Maybe a picture.”

Another said: “All sorts of s**t will come your way if you intervene with it’s purpose, best to leave it to continue to do it’s work and stay out of the way.”

Would you keep such a find for yourself?