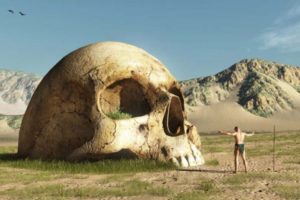 Olduvai Gorge in the East African nation of Tanzania is one of the most famous archaeological sites in the world. It is especially renowned as the place where Louis Leakey discovered fossils of a variety of apemen, including Homo habilis.

They are mentioned in most textbooks. But these textbooks are usually silent about the very first skeleton discovered at Olduvai Gorge, called the Reck’s skeleton that was found in Upper Bed II which dating from 1,15 million years old. George Grant MacCurdy a leading anthropologist from Yale University, considered Reck’s skeleton to be genuine.

According to today’s orthodox scientific opinion, humans like us did not come into existence until about 100,000 years old. In 1913, a German scientist, Hans Reck, came to Olduvai Gorge to search for fossils.

One of Reck’s African collectors saw a bone protruding from the earth and started to excavate. Reck came and completed the excavation. Using hammers and chisels, workers under Reck’s direction took out an almost complete, anatomically modern, human skeleton in a solid block of hardened sedimentary rock.

Reck identified a sequence of five beds at Olduvai Gorge. The skeleton was from the upper part of Bed II. At Reck’s site, the overlying layers (Beds III, IV, and V) had been worn away by erosion.

According to modern dating methods, Bed II is from 1.15 million to 1.7 million years old. Reck carefully studied the geology of the site, and concluded, “The bed in which the human remains were found … showed no signs of disturbance. The spot appeared exactly like any other in the horizon. There was no evidence of any refilled hole or grave”.

So this skeleton is evidence that anatomically modern humans were existing in the very distant past, over one million years ago. Reck returned to Germany, taking the skeleton’s skull with him personally, while the block of rock containing the rest of the skeleton followed by ship. 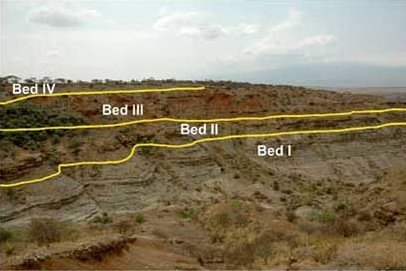 When his first reports on the skeleton came out, he won the support of many scientists, including the American anthropologist George Grant MacCurdy of Yale University.

The skeleton bore the same relation to the stratified beds as did the other mammalian remains, and was dug out of the hard clay tufa with hammer and chisel just as these were.

In other words, the conditions of the find were such as to exclude the possibility of an interment. The human bones are therefore as old as the deposit.” Mac Curdy also agreed that the skeleton was of modern type and not like an earlier form of human such as the Neandertals.

Other scientists, including Louis Leakey, disagreed that the skeleton was as old as Bed II. To settle the question, Leakey and some others went to Olduvai Gorge to personally examine the site in 1931. After careful study, Leakey concluded that Reck had been right.

Reck and Leakey, along with A. T. Hopwood of the British Museum of Natural History, published a report in Nature (1931, vol. 128, p. 724) affirming that the skeleton was as old as the bed in which it had been found, Bed II. Other scientists continued to object to the great age of Reck’s skeleton.

Reck and Leakey held their ground, until in 1932 an English geologist named P. G. H. Boswell published in Nature (vol. 130, pp. 237-238) a report in which he claimed he had found reddish pebbles from Bed III and white calcrete fragments from Bed V in a sample of the matrix from which Reck’s skeleton had been extracted.

The sample that Boswell studied had been sent to him from Munich. And there is no way of knowing if it came from the matrix that directly encased the skeleton or from some other sediments that had come in the crate along with the skeleton.

Nevertheless, both Reck and Leakey joined Boswell, Hopwood, and Solomon concluding in a report published in Nature (1933, vol. 131, pp. 397-398) that “it seems highly probable that the skeleton was intrusive into Bed II and that the date of the intrusion is not earlier than the great unconformity which separates Bed V from the lower series.”

It remains somewhat of a mystery why both Reck and Leakey changed their minds about a Bed II date for Reck’s skeleton. Perhaps Reck was simply tired of fighting an old battle against odds that seemed more and more overwhelming.

With the discovery of Beijing man and additional specimens of Java man, the scientific community had become more uniformly committed to the idea that a transitional ape-man was the only proper inhabitant of the Middle Pleistocene.

An anatomically modern Homo sapiens skeleton in Bed II of Olduvai Gorge did not make sense except as a fairly recent burial. This would still give the anatomically modern human skeleton an age of perhaps as much as 400,000 years, because the oldest part of Bed V is about that old.

And 400,000 years is still far beyond the orthodox scientific estimates for the maximum age of anatomically modern humans. Unfortunately, during World War II, Reck’s skeleton, except for the skull, vanished from the Munich Museum.

Reck excavated the skeleton from Bed II in Olduvai Gorge. He carefully searched for signs of intrusive burial (especially materials from Bed III and higher levels) and found none. Louis Leakey and other scientists, who personally studied the skeleton in Germany and investigated the Olduvai Gorge site itself, confirmed Reck’s reports.

So probably the sample examined by Boswell was not from the actual matrix of the skeleton. It was from other materials that came in the box with the skeleton from Africa. The most reasonable conclusion: “Reck’s skeleton is evidence for the existence of anatomically modern humans over one million years ago.”