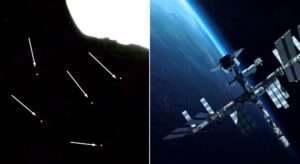 Although many of these unidentified flying objects come from different locations in space, they all follow a fixed trajectory and fly at different speeds, it seems most of them come from one location.

It doesn’t look like space junk since these objects apparently follow a fixed route and debris from a meteor seems unlikely as the first meteor shower is a month away.

From August 10 to August 13 Earth will pass through a stream of debris from giant comet Swift-Tuttle, the source of the annual Perseid meteor shower.

While some people seemed to think they were either alien spaceships or a secret government space weapons program, others believed there was a more simple explanations, and arguing that the objects were simply a few of the hundreds of satellites currently hovering above Earth as part of Elon Musk’s Starlink network.

All this, of course, is in the realm of speculation and theory as NASA has not released an official statement about the sighting.

Dismissed UFOs as a conspiracy theory for decades, ex-US defence officials, sitting politicians, and former presidents Barack Obama and Bill Clinton have all acknowledged there is something unusual going on in our skies.