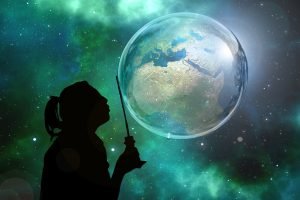 We are used to the concept of “objective reality”. Of course, each of us has our own ideas about the world around us, but still, there must be some kind of “general” reality. Alas, this does not appear to be the case.

A recent study by scientists from the ABC Federal University (UFABC) in Sao Paulo (Brazil) shows that any kind of reality only arises when it is fixed by an observer. The results of the work were published in the journal Communications Physics.

The task of the Brazilian specialists was to test the “principle of complementarity” proposed in 1928 by the famous Danish physicist Niels Bohr. According to him, the same objects have complementary properties that cannot be observed or measured simultaneously.

For example, if you are conducting an experiment with two electrons, you will be able to determine the position in space of only one of them.

By the way, back in 1927 in Brussels during the fifth Solvay conference of physicists and chemists, a dispute took place between Bohr and Albert Einstein. It was about quantum theory, which was then only in its infancy.

Einstein insisted that the quantum states of particles have their own reality, independent of the influence of operators. Bohr argued that quantum systems get their own reality only after the creation of an experimental model, that is, after scientists begin to work with them.

“The system behaves like a wave or a particle depending on the context, but you cannot predict what it will do,” Bohr retorted, referring to the dualistic concept put forward earlier, in 1924, by the French physicist Louis de Broglie, the essence of which was that matter can look like a wave at one moment of time and like a particle at another.

Subsequently, Bohr, who did not agree with Einstein, was able to formulate in detail his principle of complementarity, and thus provided other scientists with numerous experiments designed to confirm or disprove his hypothesis.

So, in 1978, the American theoretical physicist John Archibald Wheeler tried to rethink the experiment carried out in 1801 by Thomas Young to study the properties of light using a double slit.

During this experiment, the operators directed light at a wall in which two parallel slots were made. When light rays passed through one of them, as a result of diffraction, they were superimposed on the light from the other slit, interfering with it. This meant that light moved in waves. It turns out that it simultaneously has the nature of a particle and a wave.

Wheeler, on the other hand, used a device for research that operates in two modes of measurement: waves and particles. His research only confirmed Bohr’s complementarity principle.

However, more recent researchers who have tried to apply the principle of quantum superposition to particle experiments have found that they can exhibit hybrid behavior, such as overlapping in waves rather than complementing each other.

Laws of the quantum world

What did modern Brazilian scientists manage to achieve?

“Particles such as protons, neutrons, and electrons have nuclear spin, which is a magnetic property similar to the orientation of a compass needle. We manipulated the nuclear spins of various atoms in a molecule using electromagnetic radiation. In this setup, we created a new interference device for the nuclear spin of the proton to explore its wave and partial reality in the quantum realm” .

According to Serra’s colleague, Pedro Ruas Dieguez, a researcher at the International Center for the Theory of Quantum Technologies (ICTQT), the experiments gave approximately the same observed statistics as the previous ones, but at the same time they confirmed the Bohr complementarity principle.

However, the fact that a particle of matter in certain situations can behave like a wave and light like a particle still remains one of the most intriguing mysteries of quantum physics.

It turns out that reality really depends on the observer, and does not exist objectively, and this, to some extent, expands our capabilities.