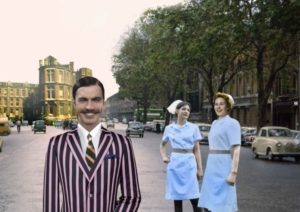 On the grey Monday afternoon of 20 January, 1964, the old lollipop man on duty outside the Children’s Hospital on Myrtle Street warned the two young nurses, Ivy and Sylvia, about the man in the deckchair-striped blazer who was standing on the traffic reservation on Catharine Street, just outside the Women’s Hospital.

Ivy and Sylvia couldn’t make head or tail of the lollipop man’s garbled warning. ‘Have nowt to do with him,’ he said, ‘he does this every few years. It starts with him chasing a huge rabbit, and then he starts trying to entice the nurses, asking them about the animal.’

The smiling nurses continued on their way to a shop on their break and when they returned to the Women’s Hospital they told the other nurses about the strange muddled warning from the lollipop man about the man in the striped blazer and the rabbit.

‘That’s odd,’ said a nurse named Rita, ‘a big chocolate coloured rabbit with fawn-tipped ears ran in here the other day. Ask Miss Harley; she brought it in here and gave it lettuce and carrot from the kitchen. She called it Rosalind. I think they took it to the RSPCA in Larch Lea.’

Two nurses, Maureen and Carolyn, were due to have their break, and they left the hospital and saw the man in the striped blazer their colleagues had referred to.

He looked very suave but dated with his short hair slicked back and a prominent moustache. He smiled at the nurses and in a well-spoken voice he said, ‘Excuse me, but have either of you seen a rabbit on the loose? It’s a doe, and it belongs to my little daughter and she’s crying her eyes out for it.’

‘Oh dear,’ said Carolyn, ‘one ran into the hospital the other day and they gave it to the RSPCA.’

‘Oh! I’ll make enquiries then;’ said the man, and then he asked, ‘look, could you two lovely ladies please grant me a big favour? My daughter wants to be a nurse when she gets older and if you could just pop into our home over there, she’d be over the moon; what, with her being upset about the rabbit and all that.’

‘Yes, of course,’ said Maureen, and although Carolyn thought there was something suspicious about the man, she went with her friend to the man’s home, off Bedford Street – to a basement, and there the man opened a trunk – and inside was the dismembered parts of a body.

Whether it was male or female the traumatised nurses could not tell, for the corpse was heavily mutilated. The man produced a knife and said, ‘Like a lamb to the slaughter.’

The nurses screamed and fled, and they met a policeman on Myrtle Street. He went to the basement flat – and found it unoccupied – and there was no trace of any trunk or its gruesome contents.

A few years after this weird incident, the same nurses saw the man in the striped blazer again, standing in the exact same spot as last time, but on this occasion he glared at them and vanished before their eyes.