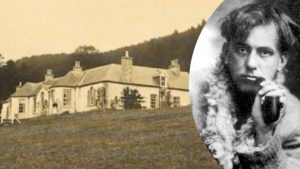 The legendary occultist’s fire-ravaged Loch Ness house was further damaged by another fire.

Boleskine House was built in the 18th century near Foyers on the south-eastern side of Loch Ness, Scotland, in an area with a long history of strange events.

Aleister Crowley-a man who was once considered the’ world’s most wicked man’-lived in the house between 1899 and 1933 and was said to have used it to perform black magic rituals.

After a fire broke out in 2015, the building was significantly damaged, prompting its owner to sell both the estate and the surrounding region.

It was later bought by a group of investors setting up the Boleskine House Foundation to restore the house to its former glory and open it to the public.

However, now it has been reported that the already badly damaged ruins were additionally damaged by another fire that tore two separate parts of the building yesterday.

It’s really weird and an investigation in to the incident is still ongoing.