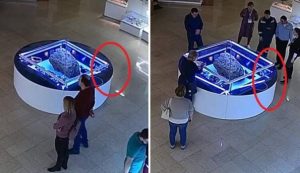 A very strange event happened in the Historical Museum of the South Urals, Russia. The dome under which the Chelyabinsk meteorite is stored began to move on its own. So far, no museum employee can explain how this happened.

The incident happened on December 14 at 15:25. The anomaly was filmed by CCTV cameras installed in the hall. Unexpectedly for everyone, the dome began to move.

Mystics is added by the fact that the case involved the largest fragment of the Chelyabinsk meteorite that fell in 2013.

It is interesting that it is simply impossible to lift the protective glass dome without pressing the remote control with a button, and, as the museum management assures, it was securely hidden in a secret drawer, which is also under video surveillance.

Aivar Valeev from the press service of the museum noted that four engines move the dome, plus there is an alarm system and bureaucracy, which consists in obtaining permits to open the dome.

Maybe it’s not even a meteorite?

Scary incident: triplets scream and hide from a monster in their bedroom