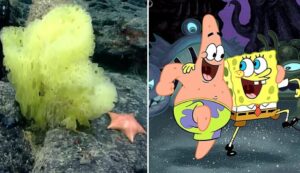 The SpongeBob SquarePants cartoon was first released in 1999. Since that time, he has won the love of viewers of all ages around the world. The Nickelodeon series follows a sea sponge and his friend, a pink starfish named Patrick Star.

Some time ago, scientists discovered a yellow sea sponge and a pink starfish at the bottom of the Atlantic Ocean, which seemed to feel good with each other.

This unique duo was spotted near New York on the slope of an underwater rock called the Retriever.

Christopher Ma noted that he was surprised by what he saw and began to compare the unusual couple with cartoon. The creatures were discovered using a special vehicle that is remotely controlled.

It was launched to explore the ocean floor from the NOAA Okeanos Explorer. The expert added that the images of both Patrick and SpongeBob in the cartoon are not entirely correct.

Some of the Twitter users, where the biologist made a note on his personal page and posted a photo of the sea couple, noted that it seems as if they “froze” right before the camera appeared.

As part of its newest deep-sea expedition, NOAA’s Okeanos Explorer ship is sending remotely-operated vehicles like the one that found the sponge and star more than a mile below the Atlantic’s surface. The ROVs, as they’re known, explore submarine habitats, livestream their journeys, and capture images of denizens in the deep.