One of the first cases of horse telepathy was documented in 1591. Morocco, a horse belonging to Mr. Banks, had the talent to thump out the amount of coins in bystanders’

pockets. Unfortunately, they were burned at the stake together by the superstitious townspeople. Later, there was Kluge Hans, Clever Hans, popular for his arithmetical ability in the early 1900s and was employed to train the Elberfeld Horses, Hanschen, Zarif, Muhamed, and Berto.

Although some cases of equine telepathy were deemed as the observer-expectancy effect, where subconscious human body language is sensed and used by horses to obtain answers, these horses weren’t explained in this way, because influencing human contact was removed. The next famous psychic horse was Lady Wonder who was declared authentic by experts.

In 1900, Wilhelm Von Osten of Elberfeld was said to have taught his horse arithmetic. The stallion answered a problem by stomping his hoof on a surface. For example, for seventy-seven, Hans thumped his left front hoof seven times; his right front hoof, seven.

Skeptics claimed Von Osten gave the horse visual signals to tell him which hoof to use and how many times to thump. Von Osten vehemently disagreed with and never showed anybody Hans again.

After Von Osten, he left his horse in the care of Karl Krall, a friend. Hans’ math skills continued. Krall knew what that training method was and, with Hans, taught other horses to do the same.

In addition to Morocco, there was the British pony, Black Bear of Briarcliff, who had arithmetical, spelling and telepathic abilities.

The news of the gifted Elberfeld equines caused a lot of controversy. Krall bought Mohamed and Zarif, two Arabian stallions, Hanschen, a Shetland pony and Berto, a blind pony as classmates for Hans and experimental animals.

Under his training and guidance, the equines learned to use decimals, read, spell and answer questions in a simple language Krall taught them. When the horses were asked what the cube root of 5,832 was, one of them tapped the correct answer, eighteen – while mathematicians were trying to figure it out on paper.

Mohamed was the most gifted. He was able to communicate with people. The stallion told Krall that his stablemates misbehaved and that the groom beat Hanschen. He told Zarif that he was lazy.

During the process of testing, Dr. Hamel asked Mohamed what the fourth root of 7,890,481 was. Within six seconds, the stallion gave the correct answer – fifty-three. This required thirty-one mathematical, calculations.

A hullabaloo soon developed in Europe about these amazing equines. 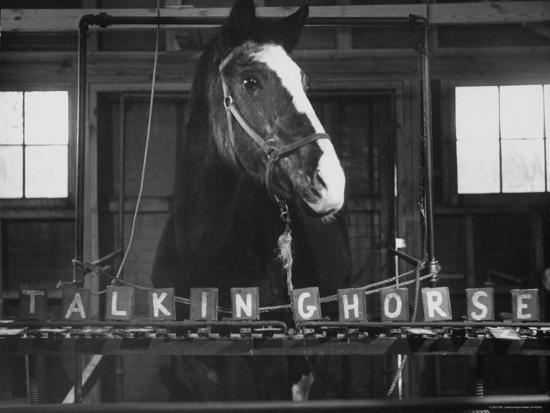 There many theories as to how the horses were able to exhibit their talents, ranging from an elaborate hoax to they were genuine. Two interesting theories were that the stallions were tapping into some universal consciousness and they were being influenced by ghosts.

Scientists, while testing the horses tried a variety of methods to prove that Krall influenced the horses and endeavored to blindfold the equines by tying sacks over their heads and watching them through peepholes.

Professor Edward Claparede, one of the foremost experts about animal psychology, concluded that the horses had genuine abilities equal to those of a fourteen-year-old. He stressed that Krall, consciously or subconsciously, didn’t influence the horses.

Maurice Maeterlinck studied and wrote about these amazing horses. When he met the equines, the first word he said was Weidenhof, the name of his hotel. Mohamed tapped out Weidenhov.

Krall reproved the horse and the stallion, so he tapped “f.” Maeterlinck was impressed with the man’s relationship with his horses and compared it to a father and his children.

In 1928, she was studied by three experts at Duke Parapsychology Laboratory, the fathers of modern parapsychology, Drs. Joseph Banks, “J.B.” Rhine and William McDougall. Dr. Louisa Rhine, who worked with them in developing the speculative science, was also an experimenter.

They conducted several hundreds of experiments with the mare and had a screen between them and the horse. The parapsychologists created a keyboard of numbers, ranging from 1 to 0 and one with the letters of the alphabet.

Lady Wonder tapped a lever that turned over the correct letter or number to answer the question. The mare answered math and informal questions by nudging the right blocks. Claudia wasn’t always present when Lady was tested, which ruled out chicanery.

Sadly, all of the magnificent equines died during WWI.

July 1955: Someone asked Genoa’s University and president of the Italian Society of Parapsychology Dr. William MacKenzie if he remembered the talented horses. He did. The only explanation he could offer was that they were “mediums” who had a superior mind.

Geoffrey Cowley wrote about Hans in the May 23, 1988 issue of Newsweek. He suggested that there was more to the case. Psychologist Oskar Pfungst theorized that Hans’ telepathy was based on interpreting the interrogators’ body language. It could be; however, if true, the animals’ skills in this are amazing.