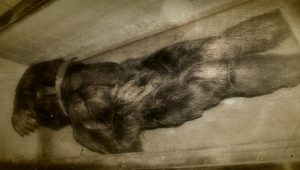 In 1968, University of Minnesota zoology major Terry Cullen contacted Ivan Sanderson to tell him about a seemingly authentic Sasquatch corpse that had made the carnival circuit with owner Frank Hansen.

Hansen had charged people a small fee to view the Iceman in his glass coffin encased in a block of ice.

Hansen traveled the U.S. sideshow circuit to exhibit the so-called missing link. He told various tales of where the Iceman came from, but the essence of the story was that a crew of either Russian or Japanese fishermen discovered the body off the coast of Siberia where he was frozen in a block of ice.

From Asia, the corpse made its way to Hong Kong and was purchased by an anonymous U.S. oil magnate who rented the body to Hansen, so it could be displayed to carnival visitors.

Minnesota Iceman and the Cryptozoologists

Heuvelmans and Sanderson drove to Hansen’s farm to view the body. They would spend several days studying, photographing and making sketches of the creature.

Hansen refused their request to open the lid, but Heuvelmans accidentally shattered the glass and a putrid stench emanated from the coffin.

The cryptozoologists discovered that the corpse had ostensibly been shot through the eye and theorized that he was murdered.

Both men believed the corpse was authentic and were convinced he was a Neanderthal Man, Sasquatch or some related creature.

Heuvelmans wrote a paper about the Iceman for the Institute of Natural Sciences in Belgium titled, “Preliminary Note on a Specimen Preserved in Ice; Unknown Living Hominid.” Sanderson wrote an article, “Living Fossil,” for Argos.

The Smithsonian got involved when Sanderson approached Dr. John Napier, curator of primates, to scientifically examine the corpse. The FBI was asked to investigate because of the murder theory.

FBI Director J. Edgar Hoover, declined because he said no law was violated since the beast wasn’t human. The Smithsonian declined to study the corpse because it appeared to be a hoax.

Sanderson and Heuvelmans backed off from their initial pronouncement that the body was genuine.

Howard Ball’s Hollywood special effects firm claimed that they made the Iceman in 1967. Ball and his son made prehistoric figures for Disneyland. 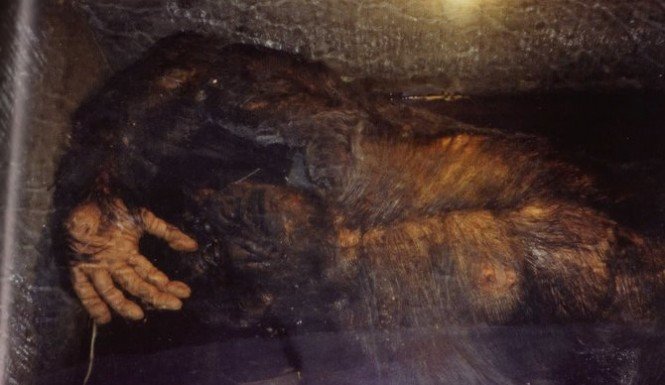 They fashioned the fake corpse from rubber to make it look like a Cro-Magnon man with a broken skull and one eye popping out.

Hansen did admit that Ball made the Iceman for him, but said he threw it away.

Sanderson Investigated Claims the Minnesota Iceman Was a Prop

The Iceman was removed it from exhibition. Sanderson investigated claims of having the creature duplicated by movie prop artists.

He discovered three California companies manufactured rubber Icemen for Hansen as early as 1967. Sanderson died in 1973 and he remained convinced that what he and Heuvelmans examined was genuine.

Was the Minnesota Iceman Genuine?

In a 1995 interview, Hansen said he was afraid of traveling with the Iceman because it was valuable and the liability in case of an accident posed too great a risk.

He took the real frozen corpse to some friends in the film industry for them to create a replica of the body. It was a model that was put on display. Later, he claimed that the bullet wound was where he had shot the Iceman while he was hunting in Minnesota.

Logic dictates that there was no millionaire owner and no genuine corpse. Hansen’s story kept on changing. It makes sense that the Iceman was a film prop from the beginning.

What about the putrid stench? It wouldn’t have been out of character for a carnival con artist to put rotting meat in the coffin in case the glass was broken.