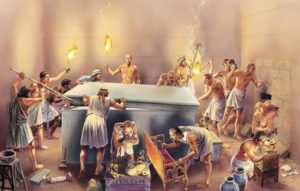 From time immemorial people have feared the dead taking revenge once their burial chambers had been disturbed. According to morals of any society or doctrines of any religion, the dead must not be disturbed or disrespected, reports pravdareport.com.

However, moral principles would always be disregarded if they stood in the way of science. An insatiable desire to know everything would prevail over the warnings and precautions.

Yes, I do want to take a look at Tutankhamen, Tamerlane, and others who died thousands of years ago. In short, the number of hunters for the mummies keeps growing as the number of stories about the curses multiplies.

Are you feeling skeptical? Here are a few examples for you ponder. On June 21, 1941, Soviet archeologists opened the grave of Tamerlane so that the anthropologist Gerasimov might do a reconstruction using the skull of the ancient commander.

The Germans invaded the Soviet Union on the following day. Rumor has it that three grey-haired and grey-bearded sages appeared in the camp a few days before the grave was unsealed. They warned the chief archeologist Malik Kayumov that a war would break out if the remains of Tamerlane were messed up.

Kayumov passed the message to members of the state commission yet the work continued. Later the marshal Zhukov learned about the prediction. He advised Josef Stalin. The remains of Tamerlane were urgently put back in the grave. The world woke up to the news about the Soviet victory in Stalingrad one day after.

Archeologists and treasure hunters went flocking to Egypt since the 19th century. Lots of ancient pyramids would be vandalized, intruders would grab anything they could find in the graves, many finds would be sold to the museums and private collectors.

In 1922, the British archeologists Howard Carter and Lord Carnarvon opened the burial chamber of the Egyptian pharaoh Tutankhamen. The archeologists found numerous ancient treasures in the chamber.

In the meantime, they must have awakened some dark forces that had been lurking for thousands of years. Lord Carnarvon succumbed to a sudden disease two months later. Doctors said he had been bitten by a poisonous mosquito. George Gould, a close friend of the diseased, arrived in Egypt to pay homage to Lord Carnarvon.

Gould went down with a fever shortly after visiting the chamber. A radiologist who determined the age of the grave began complaining of extreme exhaustion. He left to Britain only to pass away shortly after returning home.

Moreover, 26 people died within the following six years. They were among those who were present during the opening of the grave. And the curse was still on. Only two persons remained alive ten years after. The curse spared Carter for some reason. He died at the age of 66.

Helmut Simon from Nuremberg spent all his life walking across the Alps searching for a snow man. In 1991, he found the body of a stranger frozen into the edge of the Similaun glacier on the border between Austria and Italia. The man’s clothes were made of leather, his backpack had some provisions. He was 46 years old at the time of death, had a strong build and excellent teeth.

Scientists found out that Oetzi was killed in action. The traces of blood of four people were discovered on the body. The warrior was stabbed in the back with a spear. His body was examined by forensic specialists and scientists.

Seven people who were somehow involved in the examination died within the following 14 years. Conrad Spindler, an assistant professor with the University of Innsbruck, died recently at the age of 66.

He had suffered from an acute kind of sclerosis over the last few years. According to the theory of the curse, Oetzi takes revenge on those who dare disembowel him 5,300 year after his death. Spindler was reportedly aware of the “curse” and kept joking about being the next victim.