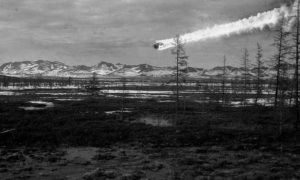 A few years ago a group of scientists investigated the Zapovednoye and Cheko lakes; experts then took sediment samples at the bottom of the reservoirs.

The purpose of the expedition was one – to detect traces of the Tunguska meteorite.

The Tunguska event was a large explosion that occurred near the Podkamennaya Tunguska River in Yeniseysk Governorate (now Krasnoyarsk Krai), Russia, on the morning of 30 June 1908.

The explosion over the sparsely populated Eastern Siberian Taiga flattened an estimated 80 million trees over an area of 2,150 km2 (830 sq mi) of forest, and eyewitness reports suggest that at least three people may have died in the event.

To date, there are puzzles that remain unresolved. For example, for so many years, scientists have not been able to find a meteorite.

For a long time, everyone thought that the mysterious cosmic body fell into Lake Cheko, since it is too round and has a strange bottom shape (conical). In addition, back in 1929, the lake was not on the maps.

The attention of scientists from Russia and Italy has shifted to the old Zapovednoye Lake, which has existed for 2,000 years.

As it turned out, there is indeed something interesting at the bottom of the reservoir. One of the layers of the bottom has a lighter color, plus, it has significant differences from other lake deposits.

According to experts, it is in this layer that meteorite particles can be detected.