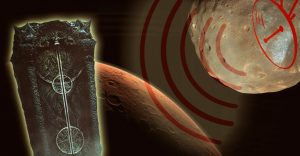 Huge monoliths have been discovered on celestial bodies inside our solar system, and scientists are unable to interpret their meaning and origins. Could these be surviving artifacts of a long-forgotten martian civilization?

More and more unusual features from across the Solar System are being brought to light by space enthusiasts and anomaly hunters, fueling the idea of former civilization(s) that used to inhabit the blue dot and other celestial bodies in its vicinity long before humans came to be, or before our universal memory had been wiped out.

There is, however, plentiful evidence to support the aforementioned claim, although mainstream science is not inclined to regard it as definitive proof. At least not yet.

Among the most peculiar pieces is the monolith from the martian surface photographed by the HiRISE camera on board the Mars Reconnaissance Orbiter, from about 180 miles (300 km) above.

The intriguing object is projected out of the Red Planet’s surface and appears to be perfectly rectangular, standing in an upright position and measuring about 5 meters across.

The stone block bears a striking resemblance to the monoliths seeded on Earth and the moon by aliens in the sci-fi movie “2001: A Space Odyssey.” It’s without doubt a puzzling piece that reminds of a former martian civilization evolved enough to transform the entire surface of their planet. But why don’t scientists agree with this hypothesis, and why the low interest towards it?

Their most convenient explanation was that the alleged monolith had broken loose from the martian bedrock and tumbled down a crevice until it got it’s rectangular shape. It’s true that the ‘monolith’ on Mars is located towards the bottom of a chasm, but is this theory enough to prove it’s perfect shape? 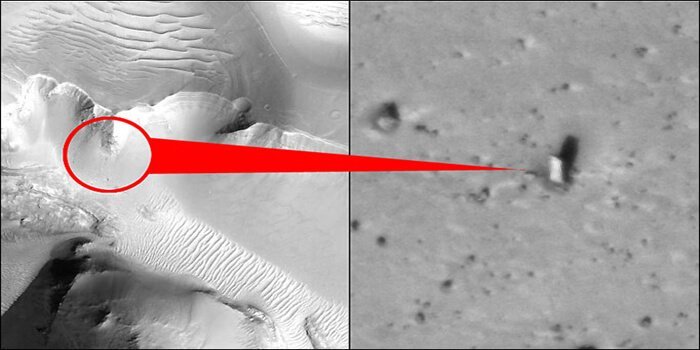 “It would be unwise to refer to it as a ‘monolith’ or ‘structure’ because that implies something artificial, like it was put there by someone for example,” said Yisrael Spinoza, a spokesman for the HiRISE department.

“In reality it’s more likely that this boulder has been created by breaking away from the bedrock to create a rectangular-shaped feature.”

The monolith’s location at the bottom of a cliff is the perfect alibi for scientists to prove their point. They say that if the alien theory would be correct, they [the ETs] would place the alleged monolith in an entire different area with less obstacles.

However, since no earthling has set foot on Mars yet, and since all the info we receive is from highly authoritarian sources renowned for disclosing only the convenient side of the coin, it becomes difficult to obtain a precise understanding of things.

Lucky for us, a small celestial body with a radius of about 7 miles (11 kilometers) harbours another puzzling monolith, this time in an area with no impediments around.

Phobos is one of the two moons orbiting Mars, the other one being Demos, it’s smaller brother.

It has an irregular shape, making it look like an asteroid that fell into Mars’s gravitational grasp a long time ago, but because of its unusual features, space enthusiasts have put the idea forward of Phobos being an artificial structure, probably used by a former martian civilization as their space station.

Scientists are unable to determine how the two moons of Mars got there, and are clueless about the intriguing monolith on Phobos.

Though what’s certain is the interest expressed by NASA to land an unmanned probe on this tiny moon, in close proximity to the highlighted monolith. They do not speak of possible alien implications, but rather of the scientific benefit it may bring for a future manned mission to Mars.

Among those attempting to raise humanity’s awareness of these space artifacts is Buzz Aldrin, the second man to walk on the Moon. He is an advocate of space exploration and seems to have defined notions of what is found both on martian grounds and Phobos.

“We should go boldly where man has not gone before. Fly by the comets, visit asteroids, visit the moon of Mars. There’s a monolith there, a very unusual structure on this little potato-shaped object that goes around Mars once in 7 hours.

The monolith on Phobos is truly an anomaly that cannot be debunked with ease. It stretches approximately 90 meters from ground level and is located in a desolate region of Phobos, making its origins even more questionable.

The object could be interrelated to the other one found on Mars. They both hint at a possible advanced martian civilization(s) that, in a distant past, managed to incorporate their moon into their planetary expanse.

The most probable guess is the monoliths were used to beam information, but other wild hypothesis speak about their role in opening temporal rifts in space and time.

None can prove or disprove the above claims because we haven’t been there to thoroughly analyze the artifacts, all hypothesis remaining viable for now. But, the future is slowly shaping our reality in a way we never dared imagine before. In a nutshell – we may soon dwell into our own imagination.

Since sci-fi scenarios are gaining ground, I believe the monoliths on Mars and Phobos to be the perfect imaginative exercise that one day may be regarded as reality. After all, there’s no science without fiction.

What are your thoughts on this? Coincidental natural formations from outer space? Or rather artificial structures with a precise purpose?