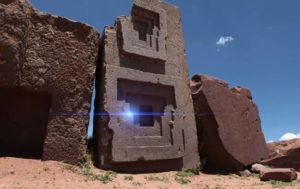 Puma Punku (literally “The Door of the Cougar”) sounds like a new fashion designer brand, but it’s actually one of the most puzzling structures built by any ancient civilization.

What was once a stone-faced earthen mound is a component of the pre-Columbian Tiwanaku archaeological site located in Bolivia, South America. Tiwanaku (a.k.a. Tiahuanaco) was the capital of a civilization that flourished between A.D. 300 and A.D. 1000, before the Inca Empire rose to power.

The ruins of Tiwanaku are located near the southeastern shore of Lake Titicaca, roughly 45 miles west of La Paz. According to Andean scholars, Tiwanaku was the spiritual and political center of the Tiwanaku culture, and Puma Punku (or Pumapunku) possibly represented its most significant precinct.

Detailed architectural and archaeological analysis of the Puma Punku complex suggests that it served as a very important ritualistic meeting place. Each of its courtyards, stairways, plazas, buildings, and platforms were seemingly designed to funnel or guide groups of people through a series of ritually important activities.

Perhaps what is most remarkable about the Puma Punku site is the highly advanced masonry skills demonstrated in its various stone structures. Although there are other exceptionally carved stone temple complexes such as Machu Picchu or the Wall of Saksaywaman (both remnants of the ancient Inca Empire in Peru), none achieve the level of engineering brilliance and technical sophistication found in the architecture of Puma Punku.

The Puma Punku measures roughly 548 feet long on its north-south axis and 381 feet wide on its east-west axis. On the northeast and southeast corners of the complex, rectangular projections measuring roughly 88 feet in length each extend beyond the basic shape of the mound, giving the site somewhat of a T-shaped design. 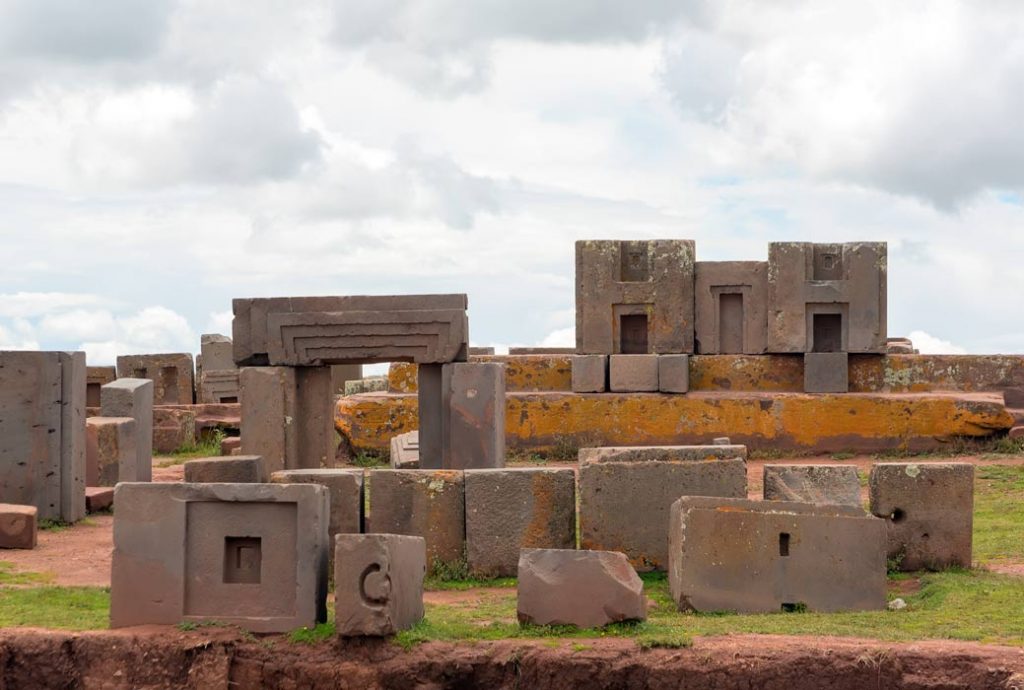 The most prominent feature of the Puma Punku complex is a large stone terrace known as the “Plataforma Litica,” which is roughly 20 feet by 125 feet in dimension, and is paved with several enormous stone blocks.

The Plataforma Litica contains the largest stone block found in the entire Tiwanaku temple complex. This slab measures approximately 23 feet long, 16 feet wide and averaging 3 feet thick. Analysis of the specific gravity of the sandstone from which the slab was carved reveals that the stone weighs an estimated 131 metric tons.

The second largest stone measures roughly 26 feet long by 8 feet wide, and weighs an estimated 85 metric tons. Puma Punku features dozens of large stones that weigh several tons apiece, making it one of the most significant megalithic structures of the pre-Columbian Americas.

One of the most striking aspects of the compound is the fact that the quarry for these massive stones is located over six miles away on the western shore of Lake Titicaca.

In addition, many of the smaller andesite blocks, which were used for various carvings and stone facing, were hewn from quarries in the Copacabana Peninsula roughly 55 miles away from the Puma Punku site.

Several theories have been offered regarding the type of manpower and construction methods that would have been necessary to transport and arrange these massive stones, but so far none have been unanimously accepted.

Although the compound has lost much of its former glory, there are still several aspects of the site that have remained intact. The colossal quartzite stones that are strewn about the site reveal a degree of workmanship that is difficult to explain in light of the traditional views of so-called “primitive” cultures. 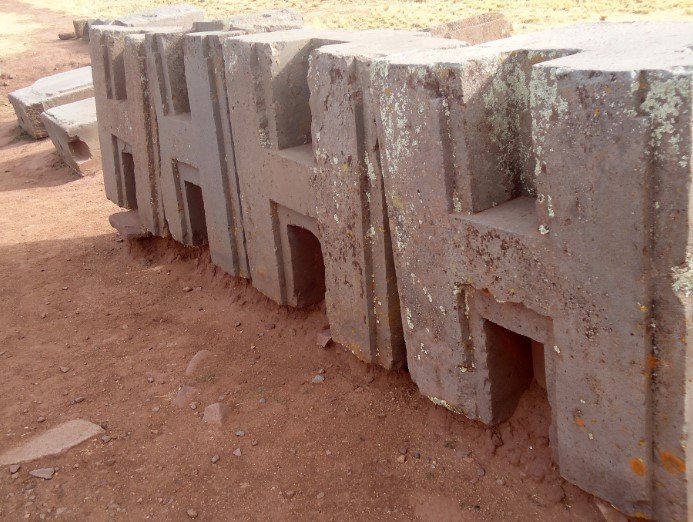 The walls of Puma Punku are comprised of finely cut stones that interlock with each other, much like a jigsaw puzzle. The stones are cut so precisely that they form flush joints, without using mortar, to the point that not even a razor blade can fit between them.

While Puma Punku offers no evidence of any written plan or schematic diagram for the construction of the site, it is obvious that the builders possessed a highly advanced knowledge of stone-cutting techniques, as well as a thorough understanding of mathematical disciplines such as descriptive geometry.

The rectilinear blocks used at Puma Punku are of such striking uniformity that they are largely interchangeable; in light of this fact, it has been suggested that the Tiwanaku may have developed some type of mass production or prefabrication techniques in the construction of the complex.

Archaeological research has also revealed that the Tiwanaku were adept at developing various elements of civic infrastructure at Puma Punku, such as functional sewage lines and irrigation systems.

Some of the most notable features of Puma Punku are the I-shaped cramps that were used for the purpose of holding large blocks of stone together, both for the walls and the platforms. These cramps are composed of a unique bronze alloy made of copper, arsenic, iron, silicon, and nickel.

Archaeological evidence suggests that these cramps were actually cast on-site, possibly by molten metal being poured into the I-shaped sockets that had been carved into the stones.

Dozens of stones show a quality of workmanship that seems to suggest some type of machining capability, as the internal angles and smooth facing of many of these stones defies the traditional notions of primitive cultures using only crude tools to carry out their work.

There are several large H-shaped blocks of stone that feature approximately 80 different faces apiece, revealing a degree of stone working capability that was simply unprecedented in the pre-Columbian era. 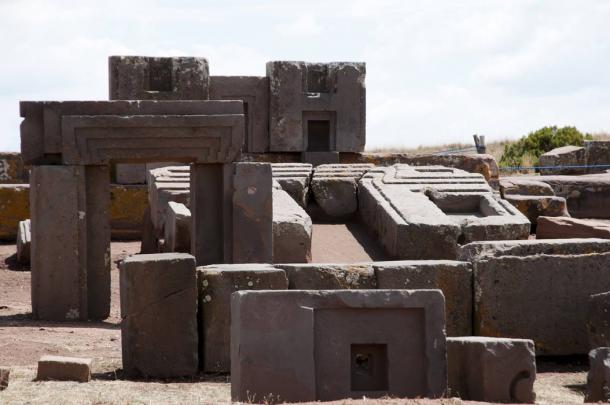 Today the Puma Punku compound appears to be “broken”, having been reduced to scattered piles of large stone blocks with various geometric shapes. Some researchers theorize that a large earthquake (or series of earthquakes) is responsible for the current state of the ruins.

Several excavations throughout the years have revealed various new components of the Puma Punku complex, some of which had been formerly covered by over 6 feet of earth.

As more and more discoveries are being made regarding Puma Punku, scientists and archaeologists are constantly being confronted with more questions regarding the origin and purpose of the site, as well as how it was possible for a supposedly “primitive” culture to accomplish such a startling feat of engineering and stone masonry.

It’s little wonder that Puma Punku has been a centerpiece of the Ancient Alien Theory proponents and even though they often misstate that the stones are diorite and granite versus sandstone and andersite.

There are still mysteries to be had. As mentioned earlier, the precision with which the stones were fashioned makes it difficult to believe it was accomplished with simple tools. How was this done?

The size of the stones up to 85 metric tons and the distance transported from the quarry (up to 55 miles) is amazing for such an ancient civilization. How where such huge stones moved over such great distances? Although we may never find out all of the answers, Puma Punku stands as a remarkable achievement from ancient times that inspire awe and wonder to this day.