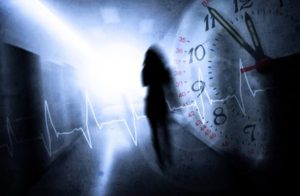 What does science have to say about psychic phenomena such as premonitions, ESP, and clairvoyant power? Are some people born with the gift of second sight? Or are psychic mediums merely charlatans with the ability to tell people what they want to hear?

Author Larry Dossey M.D., a doctor trained in rational thinking and evidence-based treatment produces a compelling story in support of premonitions, precognition, ESP, and telepathy in his book, The Power of Premonition, How Knowing the Future Can Shape Our Lives (Dutton, a Penguin Group, New York, 2009).

Dossey indicates that physical evidence and quantum physics research combine to validate the phenomena of second sight, telepathy, and other clairvoyant powers.

Going even further, Dossey suggests that these psychic powers are not special gifts of the few, but are universal dynamics available to everyone, saying, “compelling laboratory evidence that we have an innate ability to sense the future has been growing quietly for nearly two decades.”

Paranormal Research on ESP and Clairvoyance

Researcher Dean Radin, director at the Institute of Noetic Sciences conducted research showing that the central nervous system responds to events that have not yet happened, suggesting that human consciousness has access to future events as well as to the past and present.

In four separate double-blind experiments Radin found that average people respond to the content of an emotional picture before the picture is viewed. The odds of this happening are over one-hundred thousand to one. The experiment volunteers included average people as well as trained scientists.

Although psychic powers such as ESP and clairvoyance appear to contradict common sense beliefs, it appears these special powers violate no known laws of science.

Albert Einstein, in discussing the validity of telepathy indicated, “from physicist’s point of view, we have no right to rule out a priori the possibility of telepathy.”

The Rhine Research Center compiles files of premonition, telepathy, and other paranormal behaviors that are witnessed and validated by reliable observers. Scientists recognize that natural laws must conform to observed evidence.

When new evidence appears to violate previous understandings of natural laws, either the evidence is faulty or the laws are insufficient.

Modern quantum physics research is adding support to the possibilities that premonitions and other psychic powers are not only possible but conform to new understandings of physics.

Do some people have premonitions about impending disaster? It appears they do. Investigating disastrous plane crashes, researchers find a statistically significant number of last-minute reservation cancellations and changes. Researchers even found this phenomena connected with the sailing and ultimate tragic sinking of the Titanic.

It is likely that all beings have premonition abilities. Animals are known to have fled prior to the strike of natural disasters such as earthquakes and tsunami. Some studies indicate that beings as primitive as earthworms are able to sense impending danger and take evasive action.

It’s likely that many more people have premonitions compared to those who actually act based on those premonitions. Premonitions are often vague and symbolic, making it difficult to clearly recognize signs of imminent danger.

Many premonitions arrive in dreams, which most people forget quickly upon waking. Western culture, with it’s foundation on science and technology, is especially intolerant of that which cannot be proven. Many people repress premonitions for fear of being ridiculed.

As scientists conduct large and rigidly controlled experiments, they continue to accumulate evidence of the validity of premonitions, ESP, and other paranormal phenomena. The difficult-to-explain evolving research of quantum physics is also consistent with the possibility that beings have more than five senses.