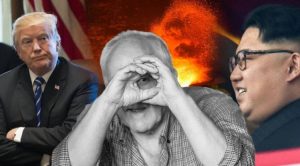 Newspapers regularly publish various predictions, which are sometimes not even verified: no matter who said it, the main thing is to be exciting. Recently, the Daily Express published a prediction of psychic Craig Hamilton-Parker.

Earlier his predictions were lost in the editorial office. When they found them, they realized that the words were already beginning to come true.

The man noted that in the next two years the Middle East will conflict. Iran will sink the American aircraft carrier at the beginning of the confrontation.

Iran’s supreme leaders will be overthrown after US revenge. The United States during the revolution in Asia will sign an agreement with Russia.

Trump will be re-elected for a second term. His powers will expand, America will flourish. In 2020-2021 due to illness, his work will be interrupted for a while.

The contract will also be signed with the UK, which is completely out of the EU. The crisis will cover Europe; it will not affect the USA and Great Britain.

In these two countries, real estate will grow rapidly in price, while in the Mediterranean countries it will fall to ridiculous prices.

The trade war with China will escalate. In China, democratic reforms will be carried out under the pressure of revolutionaries. In North Korea, the leader will be overthrown, he will flee to China.

A lot of earthquakes will happen in a year. They will force to cancel the Olympic Games. There will be news about Jupiter and supposedly about contact with aliens, whose speech will be recorded by Voyager 2.

The words of a psychic are already starting to come true, so the credit of trust in him is big.