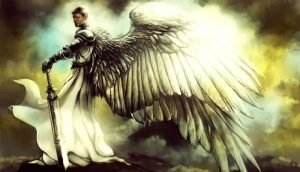 Archangels are considered to be one of the nine choirs of angels mentioned in the angelic hierarchy: seraphim, cherubim, thrones, dominions, powers, virtues, principalities, archangels, and angels.

In order to invoke the assistance of an angel or archangel, one must first ask for intervention due to the law of free will. As God’s messengers, archangels mediate between heaven and earth, providing guidance, comfort, support and motivation to those who call upon them.

Images and assumptions associated with the angel of death may be frightening. However, Archangel Azrael, who assists in the crossover of departed souls, is often described as loving, peaceful and comforting to those experiencing his presence during loss and bereavement.

Believers in divine help and spiritual support can solicit Azrael’s help in such situations as when a loved one dies, in deciding upon a professional counseling career, and while writing and reflecting on personal feelings, especially throughout times of grief.

Jeremiel, whose name means “Mercy of God,” is an archangel that reminds others to have mercy and empathy during challenging times. He helps humans as well as crossed-over souls to perform life reviews, encouraging those still present on Earth to heal situations that are out of balance.

Considered also as the archangel of prophetic visions, Jeremiel has an aura the color of deep purple. If you wish to resonate with his energy, you can hold an amethyst crystal in your hands or carry it in your pocket while intending to make a connection.

As the archangel of compassion and benevolence, Archangel Zadkiel can free you emotionally from a lack of forgiveness and judgments towards yourself or the world. His name translates into the “Righteousness of God.”

Zadkiel is also the angel of memory, helping those who call upon him with remembering any information. He guides spiritual teachers and educators in learning about subjects that ignite their passions and transferring that knowledge in casual or professional capacities.

Known by many names in Jewish and Kabalistic mysticism, Raziel is called the “Keeper of Secrets,” “Chief of the Supreme Mysteries,” and “Angel of Secret Regions.” His specialties include assisting humans with clairvoyant sight, interpretation of esoteric symbols, and manifesting ideas into practical reality.

The patron angel of law makers and lawyers, Archangel Raziel wrote down his divine wisdom in a text called The Book of the Archangel Raziel. According to legend, the piece contained within it 1500 keys to the universe’s mysteries. The book was eventually handed down through generations, reaching the hands of Enoch, Noah, and Solomon.

As the “Lioness of God,” Archangel Ariel is often linked with boosting courage and confidence. If you enlisted Ariel’s support, be observant of images of lions as a sign that she is with you. Because her aura is pale pink, the rose quartz crystal is used to connect with her energy.

Archangel Ariel is known as the patron angel of wild animals and may be invoked to aid in environmental causes. Furthermore, she is associated with instant manifestation through divine magic. You can ask Ariel to increase prosperity for yourself or loved ones.

The above list of archangels is non-inclusive. In various religious and spiritual sources, several others are explained, like the oft-referenced Michael, Gabriel, Uriel, and Raphael as well as the archangels Raguel, Jophiel, Sandalphon, and Haniel.

With their specialties and purposes, the archangels are readily available to offer divine guidance in life areas such as grieving the loss of loved ones, emotional healing through compassion and forgiveness, understanding divine alchemy, and protecting the health of the planet.