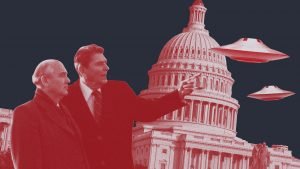 In 1985, during the first meeting in Geneva, American President Ronald Reagan surprised Soviet leader Mikhail Gorbachev. During a private walk, the American leader directly asked his Soviet counterpart: “If the United States is attacked by aliens, can we count on your military assistance?”

Most experts to this day are sure that this was nothing more than a rhetorical device. An attempt to find at least some point of contact with Moscow for dialogue. But there are those who believe that the American president, passionate about the subject of UFOs, was seriously afraid of such a scenario.

By 1985, when the Geneva meeting took place, relations between the USSR and the United States could be described as one of the most hostile of the entire Cold War period.

The first meeting between the American president and the Soviet general secretary took place in Geneva in November 1985. There were no revolutionary breakthroughs on it. The parties did not agree on anything. Reagan considered Gorbachev a “hard-headed Bolshevik”, and Gorbachev called the American leader “a retrograde and a real dinosaur.”

Only a few years later it became known that at that meeting not only the issues of reducing nuclear arsenals were discussed, but also the creation of a military alliance in the event of a hypothetical invasion of an alien civilization.

It sounds, of course, unbelievable, but this fact was subsequently confirmed by both Gorbachev and Reagan himself.

The conversation took place in private, away from members of government delegations. Only interpreters were with the sovereign leaders. Reagan asked Gorbachev if the USSR would provide military assistance to the United States in the event of an alien invasion. The Soviet leader was surprised, but answered without hesitation that, undoubtedly, in such a case, the USSR and the USA would be on the same side.

Most experts and researchers believe that Reagan’s sudden speech about aliens is nothing more than oratory. Reagan was a staunch and implacable anti-communist, while Gorbachev was still considered a similarly staunch Marxist-Bolshevik. They needed some kind of unconditional consent clause. A certain platform on which their positions would agree 100% regardless of ideology.

Thus, Reagan killed several birds with one stone with his exotic proposal. First, he joked and relieved the general tension. Secondly, he probed the opponent. Thirdly, he became convinced that the US-Soviet confrontation still has some boundaries beyond which it will not go.

In the event of a hypothetical threat to humanity, the USSR was ready to put aside differences and act as an ally. Although this threat was theoretical, it became clear to Reagan that the new Soviet leadership was guided more by pragmatic considerations than by purely ideological dogmas.

Reagan was afraid of aliens

However, there is another view of the dialogue between the two leaders. Some researchers believe that Reagan was seriously afraid of an alien invasion and his request was not an oratory, but a real proposal for a military alliance to protect the Earth from a hypothetical threat.

Of all American presidents, Reagan was perhaps the most obsessed with UFOs. Space aliens were regularly mentioned by the president in public speeches. There are at least ten known public statements by Reagan on this subject. Including in conversations with political leaders.

The most famous speech of this kind was the speech of the American president at the session of the UN General Assembly in 1987, two years after that very meeting with Gorbachev.

Then Reagan declared that the alien invasion would become a unifying factor, thanks to which all earthly differences, conflicts and disputes would disappear and people would become truly united in front of this threat. He even wondered if the first stage of this still invisible invasion had begun, maybe the aliens were already among the earthlings.

Most political leaders took Reagan’s speech as rhetoric, but the facts indicate that the president did pay great attention to the topic of UFOs. This is evidenced by many of the president’s entourage, who mentioned in their memoirs how he arranged collective screenings of fantastic films about aliens for his subordinates.

One of the main researchers of urban legends, journalist David Clark, in his book Out of the Shadows: Ufos, the Establishment and Official Cover Up, claimed that Colin Powell, the future US Secretary of Defense, and at that time an adviser to Reagan, regularly deleted references to “humanoids, aliens and flying saucers” from his speeches. Nevertheless, several times Reagan managed to defend them.

In addition, in the circles of American ufologists, the legend that Reagan was the only president who directly observed an unidentified flying object is very popular.

Allegedly, this happened in 1974, when he was still the governor of California. Then Reagan saw a luminous ball that accompanied his plane. However, this story is known from the words of the pilot, who allegedly flew the plane that evening. Reagan himself never publicly confirmed it.

Some conspiracy theorists are even sure that the famous Strategic Defense Initiative (aka the Star Wars program), which was a partial space-based missile defense system, was not conceived against the USSR at all, but just in case of a hypothetical attack from space. 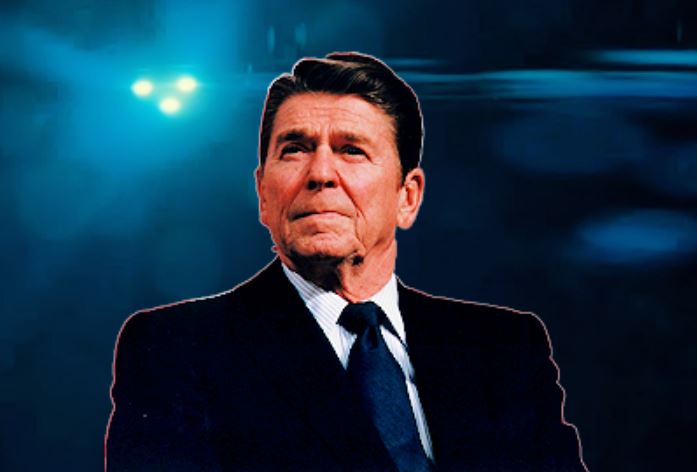 Conspiracy of communists and aliens

But the most extravagant version explains Reagan’s act by saying that he was afraid that the USSR could somehow establish contact with extraterrestrial civilizations and use their technologies to win the Cold War.

It sounds incredible, but since the 1960s, a conspiracy theory has enjoyed some popularity in the circles of the radical right of American conservatives, according to which the Soviet leaders received their advanced technologies from alien humanoids.

In support of this fact, they refer to a certificate allegedly belonging to Senator Richard Russell, who visited several cities in the USSR in the 1950s. Russell, as if with his own eyes, observed an unknown flying object in the Soviet Caucasus, taking off from a site equipped with people, and came to the conclusion that the communists were definitely collaborating with extraterrestrial forces, which he subsequently told the American intelligence services. True, there is no evidence of this story; Russell himself never spoke publicly on this topic.

Despite the precariousness of the arguments and the obvious outrageousness, the theory of “alien communist conspiracy” was in circulation in the circles of the very right part of the American conservatives during the Cold War.

By the way, many political representatives of these circles openly defended the reality of UFOs. Thus, the most famous right-wing conservative of the Cold War era – Senator Barry Goldwate – was a staunch supporter of the existence of alien life. He repeatedly publicly confirmed this and even accused the US government of hiding the facts about UFOs.

It is worth noting that in 1964 Goldwater was a candidate for US President. One of his most notable supporters, who actively participated in his presidential campaign, was the aspiring politician Ronald Reagan. So it is possible that Goldwater – a real icon of the conservatives of that time – could influence the views of the future president, who, in terms of worldview, is quite close to this group of conservatives.

Now it is difficult to say what motives Reagan was guided by when asking Gorbachev about aliens. One way or another, the military alliance of the two countries in defense of humanity did not take place.