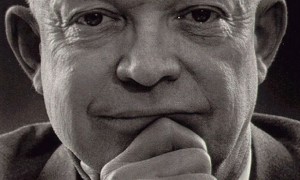 One of the first conclusions an impartial observer must make about the subject of UFOs is that rumors and circumstance play far too great a role in what ought to be a more exacting quest for knowledge. It is just such an observation which once led Dr. Carl Sagan to comment dryly that UFOs “are more a matter for religion and superstition than they are for science.”

While this dismissal is perhaps unscientific in its own right, the point is well taken. Attend any gathering of “UFO people” you want, and simply listen. Rumors abound. Perhaps worse, however, is that some of these rumors manage to circulate for years (even decades) without anyone making a reasonable effort to get to the bottom of them.

One of the most persistent of these is a story that President Eisenhower visited Edwards Air Force Base in early 1954, and either viewed the bodies of dead aliens and the wreckage of their craft, or met with live aliens on some sort of diplomatic mission to earth.

The story takes many forms, with the common thread being that Ike mysteriously disappeared one evening while on a vacation to Palm Springs, and that he was spirited to Edwards to view (or meet) aliens. It is said that he returned by dawn and shortly thereafter ordered absolute secrecy about anything having to do with UFOs.

No doubt one of the reasons that this particular rumor has continued to circulate for such a long time is that there are a number of verifiable facts associated with it–some of them rather curious.

For example, President Eisenhower did indeed make a trip to Palm Springs between February 17th and 24th, 1954, and on the evening of Saturday, February 20th, he did disappear! When members of the press learned that the president was not where he should be, rumors ran rampant that he had either died or was seriously ill.

The story even managed to get onto a press wire before being killed moments later. To quell the fuss, White House Press Secretary James Haggerty called an urgent late evening press conference to announce “solemnly” that the president had been enjoying fried chicken earlier that evening, had knocked a cap off a tooth, and had been taken to a local dentist for treatment.

When Ike turned up as scheduled the next morning for an early church service, the matter seemed ended. Although the Palm Springs trip was billed as a “vacation for the president”, the trip appears to have come up rather suddenly.

In addition, it is a matter of record that Ike had returned from a quail shooting vacation in Georgia less than a week before leaving for Palm Springs.

While the incidence of a local dentist being called upon to treat a president of the United States is unusual enough that it should constitute a rather memorable event for those involved, the dentist’s widow, in a June, 1979 interview, was curiously unable to recall any specifics relating to her husband’s alleged involvement in the affair–not even the time of day it had occurred. Yet her memory appeared flawless when asked to relate details of her and her husband’s attendance (by presidential invitation) at a steak fry the following evening, where her husband was introduced as “the dentist who had treated the president”.

This would appear to suggest a cover story, the details of which would have easily been repeated at the time, but quite naturally forgotten 25 years later. Research at the Eisenhower Library has uncovered two other facts inconsistent with the dentist story.

The first is that while the library maintains an extensive index of records relating to the president’s health, there is no record of any dental work having been performed at all during February, 1954. A file on “Dentists” contains nothing concerning any such incident either. Secondly, there is a large file containing copies of all sorts of acknowledgments which were sent by the White House to people who had something to do with the Palm Springs trip.

There are letters, for example, to people who sent flowers, people who met the airplane, people who had offered to play golf, etc. There is even a thank you letter to the minister who presided over the Sunday service Ike attended. Yet there is no record of any acknowledgment having been sent to “the dentist who treated the president.”

If the matter were as routine as Haggerty attempts to make it appear, then the absence of these records seems strangely inconsistent. The rumor of the president’s alleged visit to Edwards is not a new one. UFO contactee fringe writers began making unsupported claims about it less than two months after Ike’s trip.

So did a bizarre fellow from the Hollywood hills named Gerald Light, who, in an April 16, 1954 letter to the head of a Southern California metaphysical organization, actually claimed to have been at Edwards where he saw Ike, the saucers and the aliens. Light’s letter has been controversial for years and copies of it have turned up in all sorts of places, including the National Enquirer.

Investigation into Mr. Light’s background, however, turned up the fact that he was an elderly mystic who believed that psychic “out-of-body-experiences” were a logical extension of the reality of life and should be treated as such. In the final analysis, Light’s alleged visit to Edwards was just such an experience.

And so the story ends. Clearly something unusual occurred involving the president on the evening of February 20, 1954. Whether it was a trip to the dentist, a trip to see flying saucers, or something altogether different and unrelated, no one can say. It’s the stuff rumors are made of.