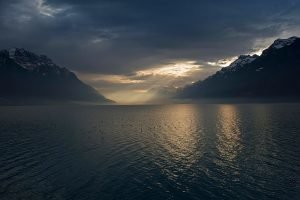 From the early 1960s to the late 1980s, more than 200 ships sank in the mysterious waters of Poyang Lake, which is known as China’s Bermuda Triangle. The incidents have resulted in numerous ships and more than 1,600 people gone missing, with over 30 survivors driven insane, reports nspirement.com.

Poyang Lake is the largest freshwater lake in China, and it is located in Jiangxi Province in the southeast of China. The lake’s actual size fluctuates tremendously. According to the Encyclopædia Britannica, at its fullest in summer, “it is 1,385 square miles (3,585 square km), but precise measurement is impossible because the difference between flood level and low-water level is sometimes as much as 25 feet (8 meters).”

According to the department in charge of maritime affairs, large ships with payloads as heavy as 2,000 tons have sunk in Poyang Lake. On Aug. 3, 1985, 13 ships were lost on a single day, which is an extremely rare event in maritime history.

Scientists have been trying to unravel Poyang Lake’s mysteries for years, but no investigations have yielded any concrete conclusions.

No wreckage found on lake floor

The Nanjing Institute of Geography and Limnology (the study of inland water) has devoted itself to exploring and investigating Poyang Lake in recent years.

Jiahu Jiang, a researcher at the institute, said it is unimaginable that no ship wreckage or victim remains have ever been found beneath the waters during the numerous expeditions they conducted, even though innumerable ships are known to have disappeared.

As a result, the puzzling conclusion drawn from the evidence is that whenever a ship disappears, everyone on board vaporizes with the ship and nothing is left behind.

According to Jiang, the Japanese army that invaded China during World War II also encountered a mishap on the lake. On April 16, 1945, a Japanese cargo ship that weighed more than 2,000 tons sank in Poyang Lake. Operated by the Japanese army, the ship was fully loaded with treasures and antiques taken from Chinese civilians.

The ship sank in the lake and none of the crew escaped the tragedy. After receiving news of the missing ship, the Japanese military ordered its navy personnel stationed nearby to salvage the ship. Only one of the divers succeeded in finding his way back to the shore, but he could not speak.

The survivor looked stricken by extreme terror. He was driven to insanity by reasons unknown. At the end of World War II, the Chinese Nationalist government tried to salvage the ship once again.

This time, they sought help from Edward Boer, a prestigious American diver and salvage expert. In the summer of 1946, Boer led a dive team and started his salvage task in the waters, but nothing was found after a months-long continuous search. During the search, several divers mysteriously vanished.

“If anyone had survived an accident in those waters, it might have been much easier to pinpoint the cause; however, that is simply not the case,” said Jiang.

Since no one has been able to make any rational explanations about the mysteries after so many decades, the lake region has been nicknamed the “Ghost Area.” Local residents have widely spread gossip of lake monsters, UFOs, and extraterrestrials.

What further provokes intrigue surrounding the area is the geographic location of Poyang Lake. It is situated in the vicinity of 30 degrees north.

Therefore, many people link the mystery of these waters with other unsolved mysteries centering around latitude 30 degrees north, such as the Bermuda Triangle in the Atlantic Ocean and the pyramids in Egypt.

One attempt at a scientific explanation attributes the sinking incidents to the influence of large aquatic creatures.

For example, freshwater dolphins in the Yangtze River and Poyang Lake could have overturned some of the ships, but this explanation is not sound, since dolphins are not powerful enough to wreck ships weighing tens or even thousands of tons.