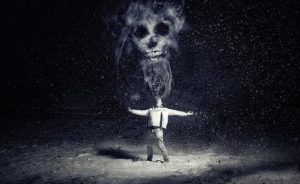 Possession is often taken as relating to the Devil’s overtaking of a human body, but the act can also be attributed to ghosts, poltergeists and even animals.

The word possession comes from the Latin possessio, meaning property. In relation to the paranormal, possession refers to the occupation of a human body by a spiritual force.

Many people associate possession as been controlled by Satan (the Devil). While this may be the case, there are several other types of possession, many of which are listed below.

Spirit possession generally relates to the occupation of a human body by a ghost or poltergeist. Believers in such phenomena attribute spirit possession to the offending entity’s unfinished business.

By far the most widely known and portrayed type of possession, demonic possession refers to the occupation of a human body by Satan or other malevolant force. Such possession is usually assumed to be Satan’s attempts at conquering mankind.

In cultures in which humans may be reincarnated as animals (and vice versa), there is a belief in anima possession. Anima possession involves a human been controlled by the spirit of an animal, usually those which hold religious status or have a year in the Zodiac. Those possessed by animals exhibit behaviour typical of that animal.

Possession is treated differently within different religions- sometimes it is treated with caution, occasionally it is invited. Below is a list describing how certain religions view possession.

– Possession in the Branches of Christianity

The branches of Christianity treat possession in much the same way- with caution. The first signs of possession in these religions is extremely violent behaviour with no apparent cause, supernatural strength, and psychic ability.

– Possession in the Orthodox Churches

The Eastern and Oriental Orthodox Churches often view possession as a situation to be dealt with properly as soon as possible. The Churches see disease, usually incurable disease, as the first sign of possession and exorcism is the accepted means of relieving the sufferer.

– Possession in Buddhism and Hinduism

Buddhists and Hindus view negative thoughts as the first sign of possession. Other signs, whether related or unrelated, include seizures and hallucinations. Depending on societal values, spirit possession may be seen as either serious (often the case with the inability to think positively) or as a sign of divinity.

During a ceremony known as the Drawing Down the Moon, Wiccans invite possession by the Goddess. The High Priestess is usually the only one to be possessed and the ceremony is performed as a means of giving the Goddess a true voice. The Goddess leaves of her own accord.

Symptoms of recognised medical illnesses are often mistaken for possession, usually in places where knowledge of the conditions is scant or non-existent. A few examples are listed below.

Due to the altered state of reality experienced by many sufferers of psychosis, hysteria and/or mania, the conditions are sometimes mistaken for possession. Demonomania is an accepted mental illness characterised by the patient’s belief that he or she is possessed.

Among other symptoms, advanced schizophrenics tend to exhibit social impairment, unusual speech patterns and a loss of total contact with reality. As such, the condition is sometimes mistaken for the patient having been subdued by an evil spirit or Satan.

History has provided several records of possession, occurring on both singular and mass scales. Below are a few examples.

At an Ursuline Convent in the French town of Aix-en-Provence in 1611, eight nuns were said to have become possessed by demons. Their symptoms included unprovoked episodes of rage, seizures, hysteria and a sudden demand for sexual attention.

At this time, France was experiencing a witch-hunt and, on this basis, the Sisters’ possessions were said to have been caused by bewitchment. A frequent visitor to the Convent and alleged lover of one of the possessed, Father Louis Gaufridi, was accused of the crime and was burnt at the stake.

1634 saw yet another case of mass possession in France- this time at an Ursuline Convent in Loudon. Sixteen of the convent’s Sisters were possessed by several unknown demons and exhibited symptoms including unprovoked rage, highly coarse language and seizures.

Their exorcist, Father Jean-Joseph Surin, volunteered his own body to the demons and was said to have experienced self-harm, suicide attempts and an inability to think clearly.

The demons were later exorcised. Father Urban Grandier, a frequent visitor to the convent, was arrested on charges of witchcraft. He was later tortured and burnt at the stake.

In 1974 in the town of Ossett, Britain, Anglican Michael Taylor became possessed by more than 40 demons. He exhibited symptoms such as extreme, violent behaviour and very coarse language. Taylor was exorcised at St. Thames Church; the priests managing to relieve him of 40 demons, although they claimed that several still remained.

Nevertheless, Taylor was sent home, where he murdered his wife and strangled their dog. Such violence was out-of-character for Taylor, and he later claimed that he had no memory of the event.

In the following court case, Taylor was imprisoned and found insane.