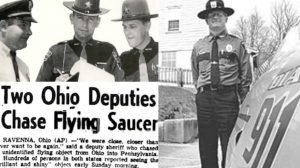 The 1960s were a swinging time full of free love, way out fashions and television shows where rythmically challenged people that were far too old to pass as the teenagers they were meant to portray danced to the groovy sounds of Hammond organs.

For many this era of peace and love came to an end when the Ohio National Guard killed four students at Kent State in May of 1970. For a handful of police officers in the Kent area, however, the fun and games would come to an end 4 years earlier, on April 17th, 1966.

Things kicked off around 4am when Police Chief Gerald Buchert rushed home, grabbing his wife and his camera in an attempt to verify an odd object in the sky that had concerned citizens of Mantua, Ohio lighting up his phone lines.

He successfully captured a photograph that would later be a wrench in the engine of some very powerful governmental machinery, but the meat of the story would begin an hour later. 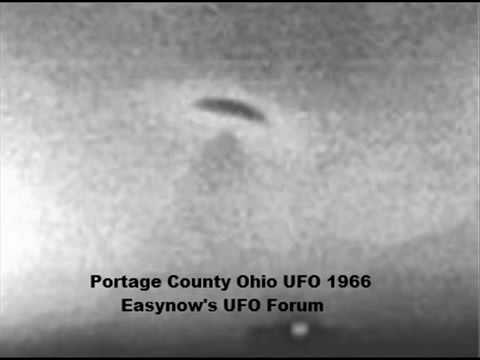 At 5:07am on an aforementioned morning Deputies Dale Spaur and Wilber Neff were driving to a hospital near Randolph, Ohio when they came across an abandoned vehicle. Stopping to investigate, Deputy Spaur noticed the car was filled with old radios and electronic equipment.

Stranger, still, was the symbol that Spaur noticed on the side of the jalopy: a triangle with a lightning bolt inside it and the words “Seven Steps to Hell” written above. By the time he read these words it was already too late for Dale Spaur, it seems.

Just as he was inspecting the car, Deputy Spaur noticed a bright light coming from the trees south of his position. Looking closer he observed a large, oval object with a bright bluish white light rising above the trees and moving towards his cruiser. The only sound heard coming from the mysterious craft was described as a “whisper behind a humming.”

At first the men felt they were unable to move, but as the craft took it’s position directly above them, Spaur and Neff summoned the will to jump into the cruiser and radioed police headquarters to descibe what they were witnessing.

The receiving officer, Deputy Robert Wilson, suggested they shoot at the UFO. Spaur declined, saying that seeing the object was like “looking down the middle of hell.” Deputy Wilson then requested they wait at their position while he dispatched a photographer. No sooner had he done so than the strange object began to move on down the road.

Spaur, a former stock car driver, must’ve grunted out an action movie quality “It’s on!” before throwing the cruiser into gear and engaging in hot pursuit of the E.T. and it’s wonderous flying machine. 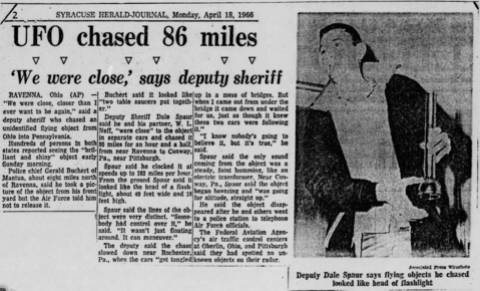 Pulling into a gas station in Freedom, Pennsylvania they met Officer Frank Panzanella who had been independently following the craft. While the four officers stood at the gas station watching the object, confirmation came across the radio of the fighter jets deployment.

At that very moment, as if it were listening to the communication, the UFO shot straight up into the blackness of space, leaving the four men, with mouths gaping, wondering what the hell they had just witnessed.

One described it as smashed ice cream cone, another as a bisected football shape and another as a textured satin-like domed object with an antennae. In the end, hundreds of people across Michigan, Ohio and Pennsylvania reported seeing something in the sky that night.

Does all this sound familiar? Steven Spielberg based much of the first 2/3rds of “Close Encounters of the Third Kind” on this incident. Unlike the movie, the officers experiences didn’t wrap up with five little pleasant notes of music, though.

Upon their return to Ravenna, Spaur and Neff were met with a flurry of reporters. The director of Project Blue Book, General Hector Quintanilla, rushed up from Wright-Patterson Air Force Base.

His mission, it seemed, was to belittle and discredit the deputies with the brunt of his govrnment-man assholery coming down on Deputy Dale Spaur. In fact, his first words to Spaur were “Tell me about this mirage you saw.”

Quintanilla’s official ruling was that the deputies had confused the planet Venus and the Moon interchangeably for an alien space craft and had foolishly chased the features of the eastern sky into Pennsylvania. Despite being told by Pentagon superiors that he was “in error”, Quintanilla stuck by his analysis.

Even though Spaur was the only officer mentioned in Project Blue Books report, the effects of this ridicule were devastating for all of the policemen involved.

Buchert, who photographed the object, lost 20 pounds in the three days that followed the sighting and afterward maintained “it’s something that should be forgotten…left alone.”

Spaur’s partner, Neff, refused to speak of the incident. His wife said her husband was as white as a sheet for hours after the chase and in a state of severe shock. He told her he would never say another word about flying saucers even if one landed in his backyard. 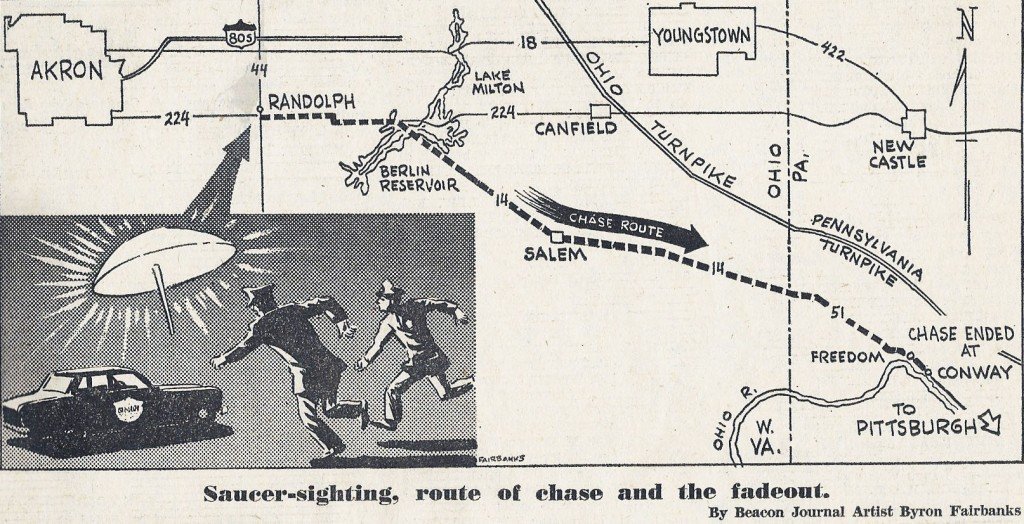 Panzella was also quiet about the incident and had his phone removed after that morning.

Huston resigned a few months after the experience, changed his name and moved to Seattle to become a bus driver.

As was said earlier, Dale Spaur had the worst time in the aftermath of the sighting. He began disappearing for days at a time and seemingly started to lose his mind. Within two months of following the UFO he flew into a rage and attacked his wife, consequently ending both his marriage and career in law enforcement.

Six months after the sighting he was a broken, lonely and haunted man living in a seedy motel on a minuscule painter’s salary. No matter who he turned to (his family, friends and even the church) he was ridiculed as the man who chased the flying saucer. When he would fall asleep it would only be a few minutes before nightmares of “the Incident” would jar him awake.

Eventually, Spaur moved to Amsted, West Virginia and became a taxi driver. It was during his time here that he was seriously injured when he fell into an abandoned mine shaft during a walk in the woods.

Rushed to the hospital in critical condition, Spaur slipped into a coma shortly after arriving. No one, outside of family, knew of Spaur’s past, though one nurse would end up getting a pretty good idea that his history was anything but ordinary.

He had been in a coma for several weeks and this particular nurse spent a great deal of time sitting with him in hopes of a miracle, until one day when she suddenly ran from the room screaming.

She never described what she saw that day, but refused to enter his room again saying only that he was an alien and possessed by something that was not of this world. Despite his new found lack of company, Spaur did make that miraculous recovery and returned to Ohio where he managed a Lakewood bar until his death in 1983.

Ohioans have reported THOUSANDS of UFO sightings over the past 70 years, including another well-documented sighting that involved multiple police witnesses in nearby Trumbull County on December 14th of 1994.