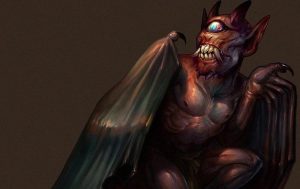 Called a ghost, demon or ogre, this creature attacks people at night while they sleep, instilling terror. Descriptions of the creature vary. Similar phenomena exist.

Popobawa was first sighted on the island of Pemba, then these spread to other islands including Unguja and Dar es Salaam in the Zanzibar archipelago and coastal Tanzania.

More attacks were reported in the 1980s, 1995, 2000 and July 2001, appearing to coincide with political turmoil, although recent attacks happened without it. The name’s derived from the Swahili words for “bat” and “wing,” describing his shadow.

Many believe the Popobawa shapeshifts into human form during the day. At night, when he attacks, he’s described as a ghost, demon, ogre with gigantic bat wings or having a dwarf body with one eye, bat’s wings, talons and pointy ears.

Some declare descriptions are meaningless because the creature is invisible or that he can shapeshift into whatever form he chooses. It’s been said that sometimes the creature is visible to all except his victim.

According to one popular legend, in the 1970s an enraged sheikh released a djinni to wreak vengeance on his neighbors. The chieftain lost control of the spirit who took on demonic characteristics.

It’s been theorized that, because of Zanzibar’s history as an Arabian controlled slave market, this story of Popobawa is an oral societal memory of slavery’s horrors.

Pemba villagers aver Popobawa becomes enraged when his existence is denied. Allegedly, he spoke to them through Fatuma, a girl he possessed. She spoke in a man’s deep voice. They also heard the sound of a car revving and rustlings on a nearby roof.

Most of the people who claim to be his victims are the poorer residents of Pemba. The creature’s presence is usually announced by the sound of scraping claws on the roof and a pungent smell.

Although he usually sexual assaults men in their beds, he’s been blamed for raping women. Victims are threatened with repeated and longer attacks if they don’t tell others about their experience.

When he terrorizes a village, families sleep together in front of their houses. Some men stay awake, sleep in groups outside their homes or smear themselves with pig’s fat, believing this repels attacks.

A prominent Tanzanian astrologer claims the demon is a spirit that is created by witches to torment their enemies. A victimized farmer said he could feel something pressing down on him and couldn’t imagine what was happening.

He felt like screaming, but had no voice. It was like a dream until he thought about Popobawa and realized this was what was attacking him.

Zanzibar hospitals have treated numerous broken ribs, bruises, and other injuries attributed to the monster.

Popobawa has been compared to legends of succubi, female spirits, and incubi, male spirits, who sexually molested their victims at night while they are in bed. While these creatures were mostly written about in Medieval times, modern accounts exist.

Old Hag Syndrome is a phenomenon when a person is falling asleep or wakes up and isn’t able to move or vocalize. A sensation of a malicious entity being present, near or on the bed, is often felt, invoking fear and dread.

Some people feel a heavy weight on their chests. Others report hearing footsteps before the attack, seeing monstrous shapes, hearing rasping breathing and/or smelling repulsive odors.

Sleep paralysis and Sleep Terror Disorder’s symptoms are almost identical to those in Old Hag. The former is the medical term; the latter, the psychiatric. Evidence exists to support stress may be a factor.

Documentation and medical reports tend to support Popobawa, whatever it is, does exist.