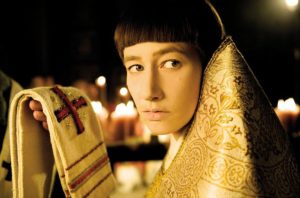 Have you ever heard of Pope Joan? If not, you aren’t alone. Many people think about the role of Pope as a strictly male job role, and traditionally, being Pope has always been a male role. However, according to some historical sources, there may have been a female pope at one point in history. The nickname of this papal personality is Pope Joan.

The story of Pope Joan stems from the Middle Ages, with written records of the legend being traced back to the early 13th century in the old world chronicle of Jean de Milly, where the entire story took place at the very beginning of the 12th century.

In the later part of the 1300s, a more influential and popular book by the name of the Chronicon Pontificum et Imperatorum mentioned the female pope at length, the story continued to be embellished, but the general gist was quite solid for most of the Middle Ages.

According to the legend, a woman by the name of Joan who was beautiful, talented, and pious disguised herself as a man in order to continue her education in the church. Disguised as a man she came to be highly regarded by the church officials and rose through its ranks.

Joan held her secret close but made one mistake. She had a lover. Unfortunately, having a secret lover as a woman in the Middle Ages came with a certain biological risk, and she eventually became pregnant. Shortly after Joan had been elected Pope, she gave birth after a particularly bumpy horse ride, and her secret was exposed to the world.

Once her secret came out in the open, multiple versions of the story of Pope Joan assigned different fates to her. In many versions, Joan dies – either killed by an angry mob, sentenced to death for heresy, or due to natural causes.

In others, Joan runs away and is shunned by the Christian church, never to be spoken of by mainstream religious leaders ever again. In Martin de Opava’s account of the Pope Joan legend, she was confirmed female and did penance for many years for the sins that she had performed against the mostly male church.

Was There Really A Pope Joan?

There have definitely been a lot of mentions of the mythical Pope Joan in the literature of the Middle Ages. As history would have it, many Christian leaders during the Middle Ages spoke of Pope Joan as a real, in-the-flesh Pope.

However, this didn’t stay the case for too long. As time passed, more and more people would become skeptical of the idea of a female Pope. Either way, most if not all religious leaders deny there ever being a real Pope Joan today. Officially, the Catholic Church vehemently denies her existence.

At the same time, Jean de Milly’s chronicle mentions that she was buried at a specific site with a small inscription written specifically mentioning the “childbearing Pope.”

This early chronicle also mentions a four day long fast called “a fast of the female Pope” that was established around the same time as the year of her purported death. However, Pope Joan’s name was never really mentioned in Jean De Milly’s work.

This has fueled speculation regarding the numbering of Popes named John. The Church records appear to skip John XX leading some to believe that Pope Joan may have been Pope John XX.

Rumors say that Pope Joan’s existence was completely expunged from the Catholic Church’s records, and that many unspoken Catholic traditions continue to be done just to shun her memory today.

Another unspoken tradition in the Catholic Church is the shunning of the street between the Coliseum and St. Clement’s church in Rome by the Pope on his processions. Once called the “Sacred Street,” the street was immediately shunned once Pope Joan gave birth in the street during a procession that she had to take part in.

This practice has been documented back to the 13thcentury, precisely when word of Pope Joan first leaked out. Is the Catholic Church hiding the reason why the current Pope never traverses the “shunned street?”

There are reasons as to why people would not believe in a female Pope’s existence. One of the biggest reasons is that enemies of the Catholic Church made no mention of Pope Joan, her supposedly cruel shunning by the church, or her death.

Some historians just say that this is more feminist and anti-Catholic “wishful thinking” than truly historically accurate depictions, especially since Pope Joan’s popularity carried well into the Renaissance and Later Middle Ages.

What makes the entire Pope Joan legend so enduring is that no one can really tell whether or not there was a female pope at one point or another. On one hand, there are a lot of written stories about the mythical Pope, with many legends and supposed church traditions linking back to the fateful incident that exposed her true gender.

Yet, on the other hand, groups who would have loved to have the shock and slanderous truth of a female Pope revealed to the public were oddly silent about the entire matter.

To date Pope Joan has been the subject movies, plays, TV documentaries, and numerous books. Like The Da Vinci Code [Dan Brown] its popularity relies on the controversy. To some it’s just entertaining fiction, to others it’s an attack on the Catholic Church, and to some it’s a conspiracy to cover up uncomfortable truths. Whatever you believe the legend of Pope Joan is here to stay.