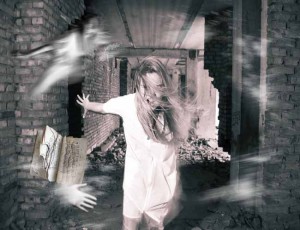 Furniture move about by themselves. Walls shake from noisy, unexplained banging. Water drips from a ceiling. Hairbrushes vanish for days, only to reappear in their place on the dresser. These are some of the standard signs and symptoms of a poltergeist haunting. From the German for “noisy ghost,” a poltergeist relates to phenomena usually credited to harmful spirits or ghosts and are characterized by psychokinesis or other physical manifestations.

Cases have been reported nearly from the beginning of recorded history. Three famous cases have taken place in this century, gaining recognition, probably, because they have been extensively investigated, reported, and in some cases even photographed and videotaped.

Another English ghost – this one in Enfield in North London – made headlines in 1977. The strange activity seemed to center around the daughter of Peggy Harper, a divorcee in her mid-40s. Again, it started on an August night. “Late at night,” An Urban Ghost Story relates, “Janet, aged 11 and her brother Pete, aged 10, complained that their beds were ‘jolting up and down and going all funny.’ As soon as Mrs. Harper got to the room, the movements had stopped – as far as she was concerned her kids were making it all up.”

But things got progressively more bizarre from there. Shuffling noises and knocks on the wall were followed by a heavy chest of drawers sliding by itself across the floor. Mrs. Harper promptly got her children out of the house and sought the assistance of a neighbor. “The neighbors searched the house and garden but found no one. Soon they also heard the knocks on the walls which continued at spaced out intervals. At 11 p.m. they called the police, who heard the knocks, one officer even saw a chair inexplicably move across the floor, and later signed a written statement to confirm the events.”

Several people were witness to the events that occurred in the following days: Lego bricks and marbles were thrown around the house, and were often hot to the touch. In September of that year, Maurice Grosse of the Society for Psychical Research came to investigate. “Grosse claims that he experienced the strange happenings – first a marble was thrown at him from an unseen hand, he saw doors open and close by themselves, and claimed to feel a sudden breeze that seemed to move up from his feet to his head.”

Grosse was later joined in the investigation by writer Guy Lyon Playfair, and together they studied the case for two years. “The knocking on walls and floors became an almost nightly occurrence, furniture slid across the floor and was thrown down the stairs, drawers were wrenched out of dressing tables. Toys and other objects would fly across the room, bedclothes would be pulled off, water was found in mysterious puddles on the floors, there were outbreaks of fire followed by their inexplicable extinguishing.”

Twenty-seven years ago, in Thornton Heath, England, a family was tormented by poltergeist phenomena that started one August night when they were woken in the middle of the night by a blaring bedside radio that had somehow turned itself on – tuned to a foreign-language station. This was the beginning of a string of events that lasted nearly four years. A lampshade repeatedly was knocked to the floor by unaided hands. During the Christmas season of 1972, an ornament was hurled across the room, smashing into the husband’s forehead.

“As he flopped into an armchair,” reports Haunted Croydon, “the Christmas tree began to shake violently. Come the New Year and there were footsteps in the bedroom when there was no one there, and one night the couple’s son awoke to find a man in old fashioned dress staring threateningly at him. The family’s fear grew when, as they entertained friends one night, there was a loud knocking at the front door, the living room door was then flung open and all the house’s lights came on.”

Having the house blessed failed to rid the house of the phenomena. “Objects flew through the air, loud noises were heard and the family would sometimes hear a noise which suggested some large piece of furniture… had crashed to floor. When they went to investigate, nothing would be disturbed.”

A medium who was consulted told the family that the house was haunted by a farmer of the name Chatterton, who considered the family trespassers on his property. An investigation bore out the fact that had indeed lived in the house in the mid-18th century. “Chatterton’s wife now joined in in causing mayhem, and often the tenant’s wife would be followed up the stairs at night by an elderly gray-haired woman wearing a pinafore and with her hair tied back in a bun. If looked at, she would disappear back into the shadows. The family even reported seeing the farmer appear on their television screens, wearing a black jacket with wide, pointed lapels, high-necked shirt and black cravat.”

After the family moved out of the house, the poltergeist activity ceased, and none have been reported by subsequent residents.

In 1998, Jane Fishman, a reporter for the Savannah Morning News, began a series of articles about a possibly haunted antique bed in the home of Al Cobb of Savannah, Georgia. Cobb bought the vintage late-1800s bed at an auction as a Christmas present for his 14-year-old son, Jason – a purchase he later regretted.

“Three nights later,” Fishman reported, “Jason told his parents he felt as if someone had planted elbows on his pillow and was watching him and breathing cold air down the back of his neck. He felt sick. The next night he noticed the photo of his deceased grandparents on his wicker nightstand flipped down. So he righted it.

The next day, the photo was facing down again. Later that morning, after leaving his room for breakfast, he returned and found in the middle of his bed two Beanie Babies – the zebra and the tiger – next to a conch shell, a dinosaur made of shells and a plaster toucan bird. That got his parents’ – and his twin brother, Lee’s – attention. Trying to make sense of the irrational, Al called out, ‘Do we have a Casper here? Tell me your name and how old you are.’ Then he left some lined composition paper and crayons and, with his family, walked out of the room. In 15 minutes they returned and found written vertically in large block childlike letters, ‘Danny, 7.’”

With his family out of the house, Al Cobb decided to continue trying to communicate with the spirit of Danny. With the same kind of notes, Danny indicated that his mother had died in that bed in 1899, and that he wanted to stay with the bed. He also made it clear that he didn’t want anyone else sleeping in it.

“The same day they found a note reading, ‘No one sleep in bed,’ Jason, who had moved out of the room, decided to stretch out and pretend to take a nap. That, says Al, was a mistake. ‘I doubled back in the room to pick up my clothes,’ remembers Jason, ‘when this terra cotta head that had been hanging on the wall came flying through the room, just missing me before it smashed on the closet door.’”

“No one really knows,” Fishman writes in her second installment, “who – or what – is leaving the copious notes, moving the furniture, opening the kitchen drawers, setting the dining room table, flipping over the chairs, lighting the candles, arranging the posters to spell out a person’s name, Jill, then hanging the finished product on a bedroom wall. Jason also spoke of other spirits: ‘Uncle Sam,’ who had come to reclaim his daughter he said was buried under the house; ‘Gracie,’ a young girl whose sculpture sits in Bonaventure Cemetery; and ‘Jill,’ a young woman who left a number of handwritten messages, among them one inviting the Cobbs to a party in their living room.”

Parapsychologist Andrew Nichols, head of the Florida Society for Parapsychological Research, investigated the case. “What happened at the Cobbs,” he told Fishman, “– more specifically to Jason – would have happened without ‘Danny,’ or the bed. It was the electromagnetic energy of the wall – that Jason started sleeping next to when they moved the bed there – that charged a psychic ability that the boy already had.”