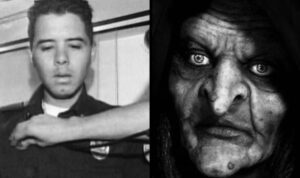 On January 16, 2004 at 3:15 A.M. Leonardo Samaniego, a police officer from Guadalupe, N.L. Mexico was attacked by a mysterious flying humanoid.

Officer Samaniego had been making his usual patrol in his patrol car around Colonia Valles de la Salla when some large black object appeared to leap from a tree next to the street and turn to face the police car.

Puzzled, Officer Samaniego turned his lights on high beam and saw a living nightmare. What had fallen or leaped from the tree was a woman dressed in black, who didn’t really touch the street, she just floated several feet above the ground.

As Samaniego’s eyes widened in disbelief, the woman’s two large black eyes, totally without lids, seemed bothered by the patrol car’s headlights and she held up her cape in attempt to protect them.

Next, because she was angered by the patrol car’s interference with her nocturnal activities or because the officer appeared to be a likely victim, the “witch” jumped onto the vehicle, and tried to get at him by breaking the windshield. The officer put his automobile in reverse, trying his best to escape her attack.

Later, in his official testimony to the bizarre events of the evening, Officer Samaniego said that the “witch” had flown violently at his windshield, trying to drive her hands through the glass to grab him. Again, he described her as having large black eyes, seemingly with no eyelids.

In Santiago Yturria’s translation of Officer Samaniego’s testimony for Jeff Rense, the policeman described the woman has having dark brown skin. Her expression was “horrible,” as she tried to get at Samaniego with her claws.

Samaniego kept his car in reverse, desperately attempting to call for back-up. When his vehicle struck the end of the street, he was so frightened that he covered his eyes to escape the view of his ghastly attacker.

When he opened his eyes and saw the horrible being still clawing at his windshield, he fainted due to the high stress.

Several minutes later when two police units arrived together with an ambulance, the officers found Samaniego still unconscious. He was uninjured—perhaps because he had remained in his patrol car—and he regained consciousness as he was being treated by paramedics in the ambulance.

During the subsequent investigation of the strange incident, a police officer from Santa Catarina and two more officers from the Regia force admitted that they had seen the same flying creature that Samaniego had encountered.

However, they had sighted the witch in the black dress and cape three days earlier, but had decided not to come forward with a report of such a flying creature for fear of embarrassment.

As the case continued to gain notice and credence from other police officers, a number of residents from Colonia La Playa told television interviewers that they, too, had seen the flying monster in the daylight, as well as in the late evening hours.

Norma Alicia Herrera who lives in Colonia La Playa declared that she and her brother also saw the mysterious flying humanoid at daytime and that it looked weird. She said that her brother was so stunned by the sighting that he was sick for almost a week afterwards.

Source: Real Monsters, Gruesome Critters and Beasts From the Darkside by Brad Steiger