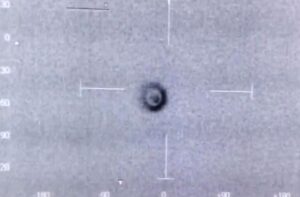 Fragments of this video were first published in 2016, but now, thanks to a request under the freedom of information law, a full video of the mysterious incident has appeared on the Web.

The video captures a disc-shaped UFO flying alongside a police helicopter. A mysterious incident took place on September 17, 2016 in the sky at night near St. Athan (Wales).

The researchers noticed that the UFO has a center, with a black ring surrounding it.

The unidentified object moved at an altitude of about 1000 feet and was accidentally discovered by the police while they were checking the operation of the thermal imager. We can say that they were extremely lucky, since they would not have seen this object with the naked eye.

Earlier, British police said that it could be a drone, but later doubted their version, as the object was too fast. The former helicopter pilot estimates the object was moving at approximately 106 miles per hour (170 km / h).

The resulting footage from a police helicopter demonstrates the UFO in the infrared spectrum, while it would not be possible to see it with the naked eye.

According to experts, the object is moving against the wind, which means it is definitely not a balloon. At the same time, it is also impossible to detect the presence of a propulsion system, which looks no less strange.

Some researchers believe that it may not be a machine, but a living creature that has the ability to become invisible to the human eye.

In this whole situation, it is noteworthy that this video is very similar to those videos that were previously published by the US Navy.