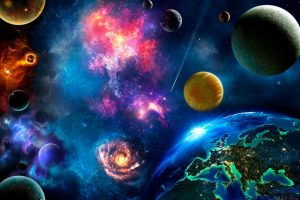 It turns out that the planets have more mysterious powers in the universe than we think. They orbit and manipulate their host stars to make them “feel” younger than their age.

That is, the whole universe works as one big mechanism.

A new study by the Chandra X-ray Observatory shows that some planets appear to be slowing down the aging process of their host stars. The results of the study were published in the Monthly Notices of the Royal Astronomical Society.

This is the first time that astronomers have documented the “anti-aging” property of exoplanets that orbit a star at or near the orbit of Mercury. These planets are called hot Jupiter. A new study reveals an unusual phenomenon that has long troubled astronomers around the world.

The researchers found that a hot Jupiter could potentially influence its host star with tidal forces, causing the star to spin faster.

“The study gives us confidence that these hot Jupiters actually make the stars they orbit look younger than they are,” said study participant Nikoleta Ilich of the Leibniz Institute for Astrophysics Potsdam.

Rapid rotation can make a star more active and produce more X-rays, which is mostly characteristic of young stars.

This means that astronomers could use a star with no planets in the system as an object for study.

“It’s almost like using twins in a study where one twin lives in a completely different area, which affects their health. By comparing one star with a neighboring planet with its twin without it, we can study the differences in the behavior of stars of the same age,” added co-author Katja Poppenheger.

The team analyzed the amount of X-rays emitted to determine how “young” the star was and looked for evidence of a planet’s influence on the star.

After studying almost three dozen systems, they found that stars with hot Jupiters tend to be brighter in X-rays and therefore more active than their companion stars without hot Jupiters.

“There have been some intriguing hints in previous cases, but now we finally have statistical evidence that some planets do influence their stars and keep them young,” said study co-author Marzieh Hossain.

An unusual man-made object captured by the rover on Mars