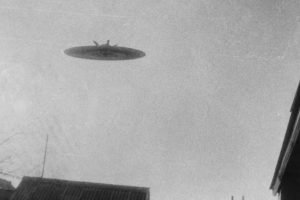 He was knighted by Queen Elizabeth II for becoming the first person to sail single-handed around the world by the clipper route and the fastest circumnavigator, in nine months and one day overall in 1966–67.

Chichester was also honoured in 1967 by a newly issued 1/9d (one shilling and nine pence) postage stamp, which showed him aboard Gipsy Moth IV. This went against an unwritten tradition of the General Post Office, because Chichester was neither a member of the royal family nor dead when the stamp was issued.

An experienced flier, sailor, and navigator, Sir Francis was familiar with the many manifestations of atmospheric phenomena. His description of what appeared to be a flying saucer can be presumed to be accurate.

We present to you his account of an event that he could not explain until his death.

Sir Francis Chichester in an interview from 1965:

“Round the storm we flew into calm air under a weak lazy sun. I took out the sextant and got two shoots. It took me thirty minutes to work them out, for the engine kept back firing, and my attention wandered every time it did…

“Suddenly, ahead and thirty degrees to the left, there were bright flashes in several places, like the dazzle of a heliograph. I saw a dull grey-white airship coming towards me. It seemed impossible, but I could have sworn that it was an airship, nosing towards me like an oblong pearl. Except for a cloud or two, there was nothing else in the sky.

“I looked around, sometimes catching a flash or a glint, and turning again to look at the airship I found it had disappeared. I screwed up my eyes, unable to believe them, and twisted the seaplane this way and that, thinking that the airship must be hidden by a blind spot. Dazzling flashes continued in four or five different places, but I could not pick out any planes.

“Then, out of some clouds to my right front, I saw another, or the same, airship advancing. I watched it intently, determined not to look away for a fraction of a second: I’d see what happened to this one, if I had to chase it.

“It drew steadily closer, until perhaps a mile away, when suddenly it vanished. Then it reappeared, close to where it had vanished: I watched with angry intentness. It drew closer, and I could see the dull gleam of light on its nose and back. It came on, but instead of increasing in size, it diminished as it approached.

“When quite near, it suddenly became its own ghost – one second I could see through it, and the next it had vanished. I decided that it could only be a diminutive cloud, perfectly shaped like an airship and then dissolving, but it was uncanny that it should exactly resume the same shape after it once vanished.

“I turned towards the flashes, but those too had vanished. All this was many years before anyone spoke of flying saucers. Whatever it was I saw, it seems to have been very much like what people have since claimed to be flying saucers.”

The UFO phenomenon in the 1930s was not as well known as it is today. It can be said that a very small number of people then heard such words as a flying saucer.

Sir Francis Charles Chichester himself only later began to understand what he saw on that fateful night in 1931, when the UFO phenomenon became more famous after the Roswell incident.