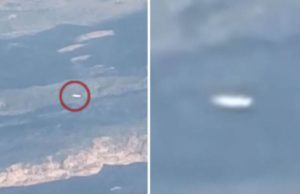 A plane pilot claims to have filmed at 40,000-ft flying cigar-shaped UFO through the air above Utah.

The video–taken over the US state’s Zion National Park –shows the mysterious white object making its way across the sky.

The shape tends to be much like a cigar, or even a tic-tac–matching hundreds of similar sightings in recent months.

The video was taken back in September 2019 but the footage only appeared yesterday after being shared by Tales From Out There on YouTube channel.

Witness report: “Video recording is taken from the cockpit at 40000 ft of an object flying at a lower altitude over the terrain. Not sure what it is.”