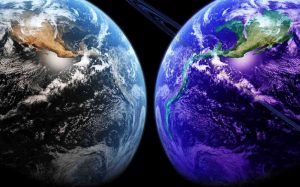 The theory of’ many worlds’ implies the existence of countless other similar but different universes, reports futurism.com.

The idea that we are living in one of the near-identical realities that are practically limitless is nothing new.

You may have died in a car accident last month in one universe for example, while in another you may have even become the United States President. In at least one of these worlds, every possible thing has occurred-every version of history has played out somewhere.

Physicist Sean Carroll of the California Institute of Technology delves into this concept in more detail in his recent book “Something Deeply Hidden”.

“It’s absolutely possible that there are multiple worlds where you made different decisions,” he said during a recent interview with NBC. “We’re just obeying the laws of physics.”

“We don’t know whether the number of worlds is finite or infinite, but it’s certainly a very large number.”

Each decision a person makes can, according to the theory, split reality into two new iterations, each following a different outcome. Carroll claims on this basis that parallel universes may not be located at any given place or time, but may instead exist relative to the observer.

Such a theory would not be shocking in the strange world of quantum mechanics.

“Before you look at an object, whether it’s an electron, or an atom or whatever, it’s not in any definite location,” said Carrol. “It might be more likely that you observe it in one place or another, but it’s not actually located at any particular place.”

Yet Carroll remains skeptical about visiting these alternative realities.

“[They] don’t interact, they don’t influence each other in any form,” he said. “Crossing over is like traveling faster than the speed of light. It’s not something that you can do.”