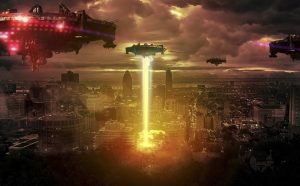 Professor Zaza Osmanov, associate professor of physics at the Free University of Tbilisi, Georgia, recently released an article in which he calculated whether China’s new 500-meter Spherical Telescope (FAST) could detect extraterrestrial devices – von Neumann probes – before they invade Earth.

The preprint of the work was published on the arxiv.org website, and the article itself has not yet passed scientific peer review for publication in an authoritative journal.

Von Neumann probes are a hypothetical type of spacecraft that has the ability to self-replicate (repair and “multiply”) using materials from the environment – parts of other spacecraft and metals from comets and asteroids.

This concept was developed by the American mathematician and physicist of Hungarian origin John von Neumann. In his opinion, advanced extraterrestrial civilizations can use these devices to explore the Universe.

In his article, Professor Osmanov just assumes that the Chinese FAST telescope will be able to detect a huge number of these devices due to its radio frequency range.

However, FAST can only warn humanity in advance of an impending threat. In theory, if these probes do get to our planet, losses will be inevitable.

An enormous swarm of alien robots would be a massive cause of concern for human life. If it’s able to self-replicate, it could consume every available resource in order to continue its reproduction. Detecting an alien swarm early would be very, very handy if we were ever unlucky to encounter one.

Let’s hope that we are not destined to confirm the hypothesis of Professor Osmanov.