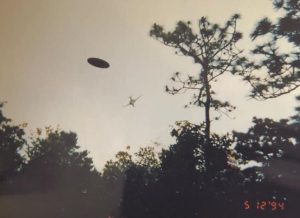 A few days ago, in our Anomalien.com group, ufologist Dustin Shutta shared new photos showing a UFO and a fighter jet. Here is what he writes:

“I own these photographs of a fighter jet/B-1 chasing or being followed by a ufo taken in 1994, location unknown. If anyone has any more info about these series of photographs let me know. Also, these photographs came from Colonel Wendelle Stevens storage locker.”

Wendelle C. Stevens was a retired US Air Force pilot-turned-UFO investigator and researcher. Wendelle began his military career in the Army Air Force in 1942.

After WWII, in the newly formed Air Force, Wendelle participated in many top secret programs, including those which had him investigate UFOs.

Having this official inside knowledge, he knew there was something to the phenomena, so he began his own private research and investigation. Since then Wendell collected more than 4,000 actual UFO photographs, and has written and co-authored over 30 books on extensive UFO contact cases.

Stevens has also been a Director of the International UFO Congress since its inception, as its original founding member. He investigated many high profile cases such as the Billy Meier case and the Aztec UFO crash in New Mexico.

Wendelle Stevens passed away on September 7, 2010 in Tucson, Arizona.

If anyone has more information about these photos, write to us or contact Dustin Schutta.