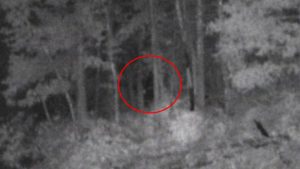 The picture, captured on Lake James shores, was taken at about 2 a.m. during a sighting of a mysterious hominid skulking in the trees last Saturday.

The team-Bigfoot 911-has been participating in the Bigfoot phenomenon investigation for a long time.

“I locked right onto this creature and knew immediately it was a Bigfoot,” said member John Bruner.

“He was standing there watching us, swaying back and forth. I guess he felt safe because the four of us were in a boat and he was on shore.”

The sighting lasted about five minutes before the creature went into the forest.

“I didn’t feel we were in any danger,” said Bruner. “Bigfoot are curious. They want to watch us, but also want to get away from us. They don’t want to engage us at all.”