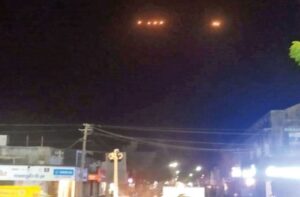 Residents of the Indian state of Gujarat on Monday night saw mysterious bright lights in the sky, appearing in turn from one object in the sky over the city of Junagadh.

Some have said that they are very similar to the Phoenix Lights.

Phoenix Lights were a series of widely sighted unidentified flying objects or UFOs observed in the skies over the U.S. states of Arizona, Nevada, and the Mexican state of Sonora on March 13, 1997.

Narottam Sahu, an advisor to the Gujarat State Council for Science and Technology (GUJCOST), told local media on Tuesday:

“In the Saurashtra region, people saw 30-40 mysterious lights flying in a straight line. This caused fear among the inhabitants of the region. However, according to space science, such phenomena can be caused by three reasons.

“It could be either due to the fact that a small meteorite entered into the dense layers of the Earth’s atmosphere. But this particular phenomenon looked like several lights in a row.

“This may be due to the fact that a satellite is passing through low Earth orbit. This is definitely an observation of some satellite. There is nothing to worry about.”

With all due respect to the representative of “Indian space science”, it is impossible to explain what people saw by a meteorite, and to understand this, it is not necessary to be an Indian adviser on science.

With all due respect to the scientific representative from India, it is impossible to explain what happened by the passage of SpaceX satellites simply for the one important reason that Elon Musk’s satellites fly in a row, and do not appear from one satellite in groups.

Sometimes attempts to explain everything by natural causes look much funnier than versions that such phenomena can be associated with UFOs.