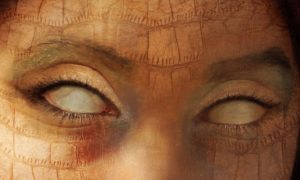 We’ve all heard of phantom limb syndrome, but what if you lose something less mechanical? A much more complicated syndrome out there – one that produces a phantom eye.

With phantom limb syndrome, people with amputated limbs experience sensations in areas that no longer exist. These can be vague senses that their body part is still there even when they can see it’s gone, or they can be acute pain – like a clenched fist that can’t be unclenched even though all the muscles ache.

All this sensation is illusory, but understandable. We all have a sense of where our body is and can feel how it moves, and we can conceptualize what such a phantom sensation would feel like. But there is a version of this syndrome that isn’t as well-known.

About thirty to fifty percent of people who have had an eye removed experience phantom eye syndrome. This has some things in common with general phantom limb syndrome. People feel sensations in the missing eye.

Sometimes it’s the sense that they need to blink, or that they’ve stayed up too long and their eye aches. For some it’s more serious, with people feeling real and immediate pain in the nonexistent eye.

A smaller percentage of people have phantom visions, as if they eye is still there. For the most part, they are basic geometrical shapes or colored lights. They’re described as tiles or fireworks, and occur thirty to forty percent of the time. One percent of cases have complex hallucinations.

They can see objects or faces in the are of space usually seen by the eye. Occasionally these are vivid enough to be mistaken for the real world. And so they have a phantom eye that sees phantom objects.

Painful phantom limb syndrome has a strange, but simple, treatment. Set up a box with a diagonal mirror inside. Have the person put their existing limb in the box. The mirror will make it look, to the viewer, like the opposite limb.

Have them relax or wriggle their limb. They’ll see that the missing limb appears undamaged, and often the pain goes away. Doctors think that the brain has a system meant to monitor where the body parts are, but which needs visual confirmation to check that its sense of them is correct.

When doctors remove the limb, they don’t remove the part of the brain that both oversees the limb and checks up on it. If the limb disappears, the brain can conjure up sensations meant to get a person to pay more attention to their body – like pain.

It’s a distress signal that the person can’t respond to. As soon as they “confirm” via the mirrored box, that the amputated limb is fine, the brain relaxes and gives up the idea of phantom sensations.

This isn’t possible with something like phantom eye syndrome. Some doctors prescribe tranquilizers or have the patient seek therapy. Strenuous exercise is also a very good way making the person forget to focus on the missing eye.

Those who can’t be helped this way are given something much stranger. Some phantom eye syndrome sufferers receive a medical device that runs an electric current through the eye socket. This constant sensation either distracts from, or masks, the phantom sensations. They taser their phantom eye into submission. If only it were as simple as a mirrored box.