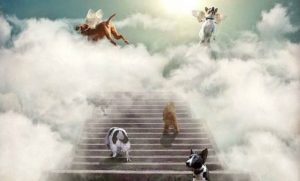 A very popular question for clergy of all denominations is: “Will my pet go to heaven?” Can people find comfort in the belief that their companions are not forgotten?

Animals generate strong emotional responses. Those persons who profess a spiritual and emotional union with their pets will testify to its validity, exhibited through the criterion of individual faith experience.

Humans tend to relate directly to their companion animals as members of the family, and there are theological explanations for it.

According to the Bible, humans and animals share covenant that was established by God in Genesis 9: 8-17. It was an agreement meant to be everlasting and since God initiated it, it was, therefore, sacred. If God honors His agreements as we have been taught and His covenant is permanent, is this not good news for people and pets?

Church tradition also speaks to this issue. Francis of Assisi is one historical figure in the church that engaged in a special relationship with the animals.

He spent so much of his time with them that it is probable he pondered whether he would see them again in the next life. With respect to the contemporary church, the evidence of animals being held in high regard can be seen in worship: Christians from many denominations celebrate the blessing of the animals at various times of the year, especially in the spring.

There is usually no promise of new life inherent in these services but their popularity attests to the fact that people associate their animals with a key aspect of their faith and belief.

What humans experience on a daily basis with their companion animals also indicates that something on the level of the sacred takes place. After all, in America at least, people tend to revere their pets.

They provide something. Many have described this as “unconditional love” or “total acceptance of who I am.” That personal experience of faith cannot be denied.

Those believers who are assisted by a guide dog or support dog, or the K-9 officer who works directly with his or her four-legged partner, would probably expect to be reunited with their companion animal in the next life.

Reason and Faith and The Animals

Some might balk at this point and say, “But this seems unreasonable. Animals aren’t baptized, after all, so why would they go to heaven?”

Others simply expect their pets to go to heaven without considering an alternative. Still others never give the matter any thought. Many learned individuals have offered opinions.

Stephen H. Webb, Ph.D., reflecting on the writings of C.S.Lewis, said, “Tame animals obtain their sense of self through their masters, and so when we think of human resurrection, one should include in that thought the resurrection of those who depend on humans and who complete the life of humans.”

So what to make of the question? Like so many spiritual questions, it defies a certain answer. Arguments can be made using Scripture, tradition, experience, and reason. Definite answers may be put forth with the best of intentions but the truth is, “we won’t know until we know.”

But as Christians we may take some comfort in the idea that our pets, like us, are a part of the created order and as Christians we subscribe to the notion of eternal life. If it turns out that eternity is the consummation of creation, why would the animals not share in it?

Past Life Regression Discoveries: Where They Come From and Why