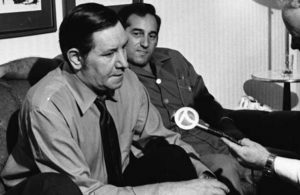 Hurkos primarily used psychometry, reading a place or object. He also employed telepathy, clairaudience and precognition in solving crimes and while performing on-stage.

Hurkos, born in Holland in 1911, showed no psychic ability until after he was in a coma for four days and claimed to have had a near death experience, NDE.

He saw his life in review and went to a place where there were nine bearded robed men who told him there was a mistake. He had to return to earth to finish his life’s purpose.

He felt an infusion of energy and was told he had powers that he could only use for good.

His new abilities made him uneasy. He had experiences of clairaudience, psychic hearing, and other forms of ESP. In 1946, he went to a psychic demonstration and outdid the psychic. The theater offered him his own show. In 1947, he performed his first investigative work.

Hurkos came to the USA in 1956 to be tested for psychic ability by Andrija Puharich, MD, a pioneer in linking medicine and parapsychology. He was tested for 2 ½ years in highly controlled experiments.

The results convinced Puharich that Hurkos’ psychic abilities were far above others he had tested, with 90% accuracy.

Hurkos stayed in the USA and became a celebrity. He appeared on TV and radio talk shows, was a guest star on other shows and in movies including The Boston Strangler, a case he had worked on. He was popular on stage and in night clubs.

Hurkos relied primarily on psychometry, the ability to read a place or object, and clairvoyance, psychic seeing, to solve crimes, having visions when he touched objects.

During performances, he used his gifts of telepathy, psychic communication with another person and precognition, knowledge of the future. He told audiences not to give information to or ask questions if they went to psychics.

True psychics would know what the issues were. He believed many psychics are fakes.

As a psychic, Hurkos worked on two high profile murder cases. One was the Boston Strangler who raped and murdered thirteen women from 1962 to 1964. Albert DeSalvo confessed to the crimes. Hurkos hadn’t able to identify him as the murderer.

He worked on the Manson murders. Hurkos saw a vision of Manson and said the first name was Charlie. He said that the Tate-La Bianca murders were ritualistic The killers were involved with drugs and sex. He was terminated two weeks after starting the investigation. No reason was given.

Hurkos asked Norma Lee Browning to write a book about him. She was a skeptic and journalist who exposed frauds. She became a believer, writing that his accuracy rate ranged from 87% to 99%.
Charles T. Tart, transpersonal psychologist, and Jeffrey Smith, both parapsychologists, tested Hurkos and didn’t find any evidence of psychic abilities.

No psychic is 100% accurate 100% of the time. Hurkos, in addition to exhibiting psychic ability was a showman. His real last was Van Der Hurk. He claimed he used the last name, Hurkos, during World War II’s Nazi occupation of the Netherlands while active in the underground resistance. Facts proved that he not involved in the movement.

What could account for different test results? It’s possible that Dr. Puharich and Ms. Browning wanted to believe in Hurkos’ abilities and it affected their conclusions. It is possible that Hurkos had an “off” day when he was tested by Tart and Smith.

At the time of his death, Peter Hurkos resided in Studio City, Los Angeles. Hurkos died in 1988.