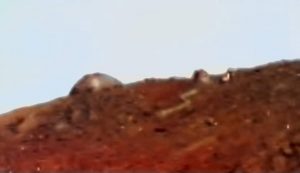 Ufologist Eric Jarvey, reviewed last week images of the Red Planet taken by the American rover Opportunity and discovered an amazing detail on one of these frames. The researcher is convinced that the censors of NASA made a big mistake, not noticing or forgetting to erase from the photo the real dome, towering over a hill in the distance.

The mysterious object looks ideally flat and man-made, strikingly distinguished from the background of a desert Martian landscape. Thus, the author of the find has no doubt that on the surface of a distant celestial body is something built by intelligent beings. The dome clearly reflects the light, that is, it is made of glass, metal or similar material.

But who built this hemisphere there? Jarvi reasonably believes that this could be the work of representatives of an extraterrestrial civilization living under the surface of Mars. However, the ufologist also does not exclude the possibility that the mysterious dome was built on the Red Planet by America or Russia, who secretly mastered long-distance space flights and imperceptibly (secretly to the general public) began to colonize Mars.

Note that ufologists, conspiratologists and virtual archaeologists constantly find various anomalies in the images of the Red Planet that could not have been created there by Martian nature.

Despite this, scientists of the NASA invariably assert that our eyes deceive us, and there is nothing abnormal on the fourth planet away from the Sun.