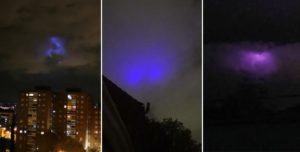 Recently, people from all over the world have been talking about a strange blue glow in the sky, which they thought was somewhat sinister.

The first reports of a mysterious glow appeared at the end of last month in the United States, Australia and Spain.

Many eyewitnesses of this incredible phenomenon as evidence provided photos and even videos.

A few days ago a video appeared from Madrid, where you can clearly see how bright blue light breaks through the clouds at night. This phenomenon was observed for 7 minutes.

Experts have not provided any official explanation for this strange phenomenon. Eyewitnesses, in turn, attributed everything to aliens or some secret tests. Some even considered this a forerunner of strong earthquakes and disasters around the world.

Many people know that at the epicenter of an earthquake, where quartz layers are tightly pressed against each other, they cause a very strong magnetic field. As a result, a certain glow may appear in the sky.

But in those countries and cities where the video and photos of the blue glow came from, they have not been subjected to earthquakes recently. Therefore, nothing is known today about the real causes of this phenomenon.