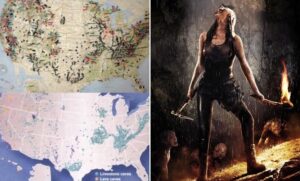 This conspiracy theory originated years ago, but recently became very popular on social media when a picture went viral (see below) comparing the disappearance of people in the United States to the location of underground caves.

It is assumed that all these missing people, whose circumstances of disappearance were rather strange and who have not yet been found alive or dead, actually accidentally fell underground or deliberately decided to climb into the cave and could not find their way back.

It is known that in the United States there are a lot of long and unexplored caves, for example, Mammoth Cave in Kentucky is considered the longest in the world, its tunnels stretch for 587 thousand meters and reach 115 meters in depth.

@danthedingbat21, a researcher from the TikTok service went even further and developed a theory about why so many people disappeared into the caves. According to her version, people were deliberately dragged underground by certain creatures, something like feral people who are cannibals.

In the clip, she explains: “If you look up where people go missing in national parks, it directly correlates to the cave system in the US.

“I know you have all seen videos where they talk about cannibals being in the woods and there just being feral people out in the woods.

“I kind of think there are communities of those people and they take people when they can.”

She also reckons that when people hear Bigfoot or Sasquatch ‘sounds’ it’s actually the cannibals letting each other know they’re around.

Dan goes on: “I think the Sasquatch sounds that you hear in missing 411 and those Sasquatch videos where it sounds like something’s howling but they’re not sure what, I think that’s their way of communicating to each other, letting each other know who’s where.

“We’ve never seen a Sasquatch before, we’ve never seen Bigfoot before but we’ve found the clothes of missing people 100 yards away from where they were originally taken.”

According to the National System of Missing and Unidentified Persons, more than 600,000 people go missing in the United States every year. Up to 92% of these people are found alive or dead each year, but the rest are never found.

From his research, there are at least 1,600 people, give or take, currently missing in the wild somewhere in the United States.

A man discovered a possible UFO landing site in the forest