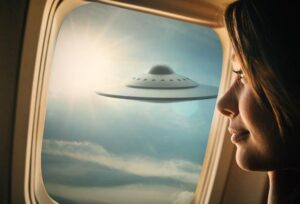 Passengers taking off from Glasgow Airport were amazed at the sight of what appeared to be a UFO flying near their plane, reports glasgowlive.co.uk.

The sighting took place on a flight that took off from Glasgow Airport last Thursday morning (February 17).

One passenger was able to take several clear pictures of the unidentified object, which appears to be large and oblong. The photographs were taken by a person sitting on the right side of the plane as it cruised at high altitude above the clouds.

The Daily Star adds that the UFO report comes weeks after a passenger on a flight from Glasgow to London was startled by a “strange object” she spotted.

The woman explained that she noticed a UFO when the plane was descending to London. According to her, it looked like a “camouflaged object” that appeared to be “floating” rather than flying.

And earlier, an American Airlines pilot reported a UFO sighting to the FBI for investigation. The FBI has confirmed reports that Flight AA 2292, en route from Cincinnati on February 21, 2021, nearly collided with an unidentified flying object shortly before February 22 local time.

The pilot contacted Albuquerque air traffic control to request information about the strange sighting, asking if there were “targets” in the air. “I hate to say it, but it looked like a long cylindrical object, almost like a cruise missile, which was moving very fast right above us,” the pilot said.

While American Airlines initially downplayed the report, a company spokesman confirmed the incident in a statement saying, “After discussing with our flight crew and receiving more information, we can confirm that this radio broadcast was from American Airlines Flight 2292 on February 21st.